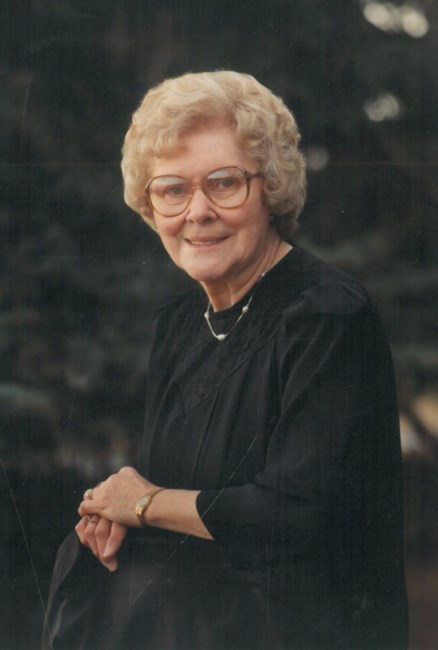 Isabella “Violet” Wallace Robson went to be with her Lord and Savior on June 24, 2020. She was predeceased by her husband Willie Robson, her daughter Naomi Barker, her infant grandson Bradley and two infant great-grandsons Noah and Simon.

Vi was born in Hearleigh by Milo, Alberta on April 22, 1921 to Jack and Bella; the youngest sister of Joe and Annie. She spent her early years on the homestead and attended the Barrywater school. The family moved to Milo in the mid ‘30s where she went to high school and in 1938 they all moved to Calgary.

Willie and Vi had been married only 5 years when he passed away, leaving Vi a young widow with 2 babies. Bill was 3 years old and Naomi was only one year old. It was during this difficult time that Vi learned to lean on the Lord for comfort, strength and confidence to carry on. She always thanked God that He provided her with supportive family, church family and employment. Vi held various secretarial jobs and a long time position at Tupperware, and later as registrar at CNIB (Canadian National Institute for the Blind).

Upon retirement, Vi was encouraged to volunteer at Camp Okotoks during children’s summer camps. She greatly enjoyed her time there and became known to all as “Auntie Vi.” In fact, there are some who worked with her there who still fondly refer to her as “Auntie Vi.” She travelled many places in North America, England, Wales, Scotland and Australia with family and friends.

In lieu of flowers, the family would appreciate donations being made in Violet’s memory directly to the CNIB.