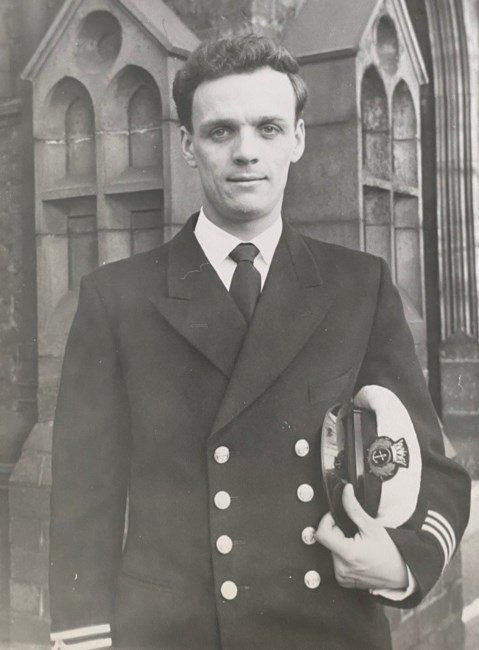 On Saturday, May 30, 2020, John Royston Broderick, loving husband and father of two, grandfather to one, passed away at the age of 87 in Calgary, Alberta. Roy was born on November 21, 1932 in Widnes, England to James and Florence (Manifould) where they lived with his three younger sisters, Barbara, Dorothy and Gail. In his early years, Roy played Rugby and was offered a spot in a professional league but chose a different route. After spending time in the Royal Merchant Navy as First Engineer, he married Olive Jackson on December 5, 1959 after courting her around Widnes on his motorcycle. Shortly after, they moved to Alberta, Canada. There he completed his Engineering Degree and practiced in his field for 45+ years. Roy and Olive raised two children, John and Diana. Roy’s work took him across Canada to live, British Columbia, Nova Scotia and Alberta, allowing his family to see the country he and Olive made as their home. Roy had a passion for History, reading and writing. He combined his passions and wrote a fiction war novel after many years of research. He also loved to travel, a passion which stemmed from the world travels from being in the Navy. He was able to tell fascinating tales about each of these destinations and amuse us with anecdotes. He was known for his British wit, his intellect and his compassionate spirit. His son John, daughter-in-law, Chloe and granddaughter Juliette, along with his daughter Diana, and son-in-law Emile, will miss Roy but take comfort in knowing Roy is reunited with Olive who passed 8 years earlier. A special mention to his dog, Trixie, who was there for him after the passing of Olive and got him through some hard times. Memorial donations in memory of Roy can be made to the Alzheimer Society of Calgary.
See more See Less

In Memory of John Royston Broderick