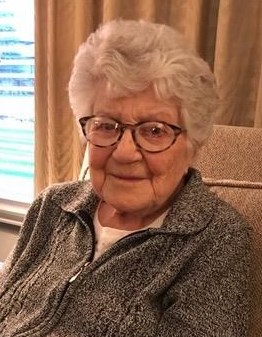 Our mother Joyce, passed away on April 29, 2020 at the grand age of 101, just 19 days short of her 102 birthday. Born in Saskatoon, Saskatchewan and growing up in different cities there, she had many fond memories of summers at her family cottage at Emma Lake with her sisters, swimming, golfing, and in the winters, skating at the local rinks. She met John Leonard Edey (Jack) during the war and they were married in 1943 while he was serving overseas. There were numerous moves with his work and finally settled in Calgary where they raised their three daughters. She was one of the few working mothers amongst our friends and worked for Eaton’s for many years. They enjoyed their cabin at Anglemont, BC on Shuswap Lake so much that on retirement they moved to Sorrento, BC where they lived over 35 years enjoying their friends and life there. Mom was very active in retirement being involved in painting, bridge and supporting the community centre. She was an avid reader, working her way through the local library and thoroughly enjoying living in that beautiful area. She was always happy to discuss politics and politicians. After her husbands’ passing in 2000 and due to her failing health, she returned to Calgary. She was predeceased by her husband Jack, her parents, two sisters and a niece. She will be missed by her daughter, Brenda (Larry), Joan (Greg) and Janice; five grandchildren; ten great-grandchildren and two great-great-grandchildren. In her long life she experienced the depression, war, and prosperity. She was a very positive person, always looking for the good and optimistic on the future; treating everybody with courtesy and respect; interested in life and those around her. The family would like to extend their warmest thanks to the many staff at AgeCare Walden Heights for the care, attention and friendship given in her final years.
See more See Less

In Memory of Joyce Hilda Edey