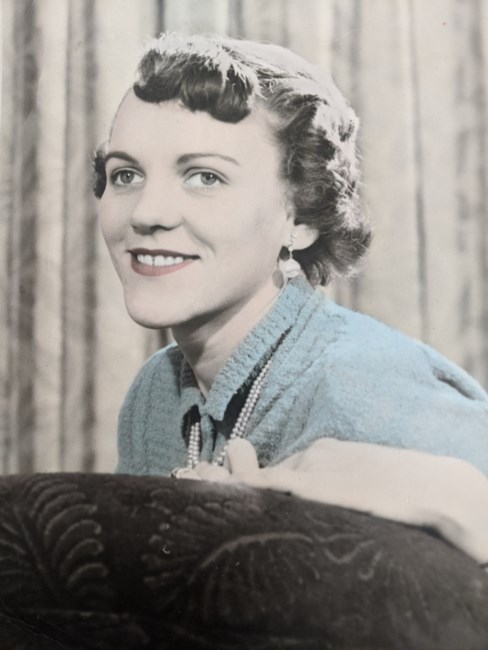 The eldest of six children, Marlene was born on September 17, 1931 in the Orangeville District of MacGregor, Manitoba, to parents Viola (McAskie) and Jack McGillvray. She grew up on the family farm and in nearby Austin, Manitoba. After high school, she worked in Winnipeg and Toronto for a time but returned to Manitoba following the death of her mother in 1954. Soon after she was swept off her feet by a strapping Irishman at a MacGregor dance hall, under the watchful eye of her father, a fiddle player in the band that night. She married Jim Gunn in 1956. After settling in Estevan, Saskatchewan, to begin raising their family, in 1974 the Gunns moved to Calgary where they had many close friends in the oil and gas community through Jim’s longtime employment with Suncor. Marlene worked for the Guaranty Trust Company until her retirement, and continued to be involved in the community for many years as a volunteer with local arts organizations, and as a member of the Suncor Sunsetters retirees club and Royal Canadian Legion North Calgary Branch No. 264 Kensington.

Lovingly remembered by her daughter Patricia and sons John (Emma), Murray and Barry (Stacey); her grandchildren Ray, Erin (Colin), Brendan, Ryan and Katie and great-grandchildren Michaela and Eamon. She also leaves to mourn her brother Wes (Janet) McGillvray and three sisters; Anne (Bob) McGillvray, Loretta Dixon and Jan McGillvray, as well as many beloved nieces, nephews and cousins. Marlene was predeceased by her husband Jim Gunn in 1984, her sister Hazel Schmidt and her very special friend Gene Sanford.

She was a lifelong lover of music, an ardent sports fan, and a warm, open-hearted and generous soul who will be sorely missed by everyone who knew her.

The family wishes to thank the superb staff at AgeCare Skypointe for the unfailing kindness and support that they provided in Marlene’s final years.

Marlene will be laid to rest next to Jim at a private family service at Queen’s Park Cemetery, 3219 - 4 Street N.W., Calgary, Alberta.

In lieu of flowers the family asks that you consider making a donation directly to The Mustard Seed at https://theseed.ca.