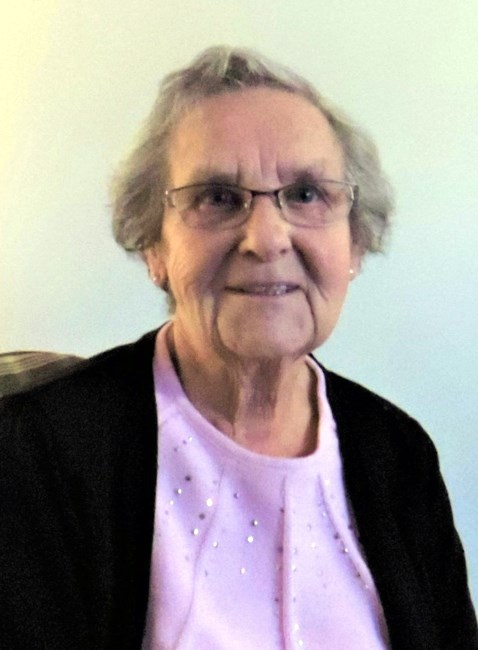 Joan Ditner (nee McGarry) passed away peacefully on Thursday, January 20, 2022 at Hilltop Manor, her home for the last 2 ½ years. She was in her 89th year. Joan was born in Guelph on March 11, 1933 to Patrick McGarry and Mary O’Halloran who predeceased her. In 1954, she proudly graduated from St. Mary’s Hospital School of Nursing. The following year, she married Ross and their lifelong journey began. Life was busy raising their 5 children. Joan was a wonderful, caring mother, sewing all their clothes and serving a freshly baked dessert at every meal. Dutch apple pie was her specialty. In 1975, when Ross founded Ditner Printing, she was by his side working daily and still managing all the homemaking responsibilities. She began golfing at Galt Country Club with “the Business Girls” and played until age 79. When Ross passed in 2002, she continued working in the family business until 2006. Joan was a very generous person, always willing to give a helping hand and be a chauffeur to whoever needed a ride. She took up knitting later in life and every year donated about 150 pairs of mitts to the Food Bank. She was a 50-year member of the CWL. Her faith gave her her greatest comfort, praying the rosary daily. When dementia began to set in, she began praying it “numerous” times a day. She is lovingly remembered by her children Rosemary Stafford (Dave), Geoff (Pam), Lori Hoyles (Jim), Colleen Parsons (Paul), and Paul (Maria). She leaves to mourn 11 grandchildren and their spouses and 11 great-grandchildren. They were the light of her life. She is survived by her brother Jack and his wife Peg, and sister-in-law Mary El Ditner. Funeral Mass of Christian Burial will be held at St. Clement’s Church (745 Duke Street, Cambridge) on Wednesday, January 26th at 10:00 a.m. Space is limited, so friends and family must reserve a spot on the sign-up sheet, which can be found by clicking the link below the "donations" header on this web page. Private interment will follow at Parklawn Cemetery. In lieu of flowers, donations may be made to the Alzheimer Society of Canada.
See more See Less

In Memory of Joan Patricia Ditner