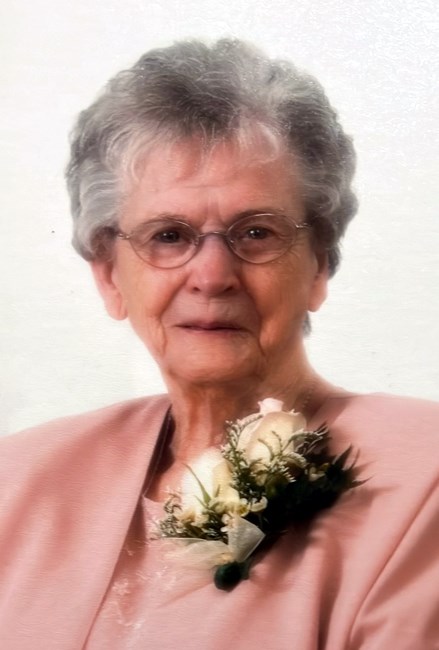 Passed away at Campbellton Regional Hospital on September 7, 2022 at the age of 103, Mrs. Margaret Irvine of Mann's Mountain, wife of the late Lionel Irvine. Born in Mann’s Settlement on August 21, 1919, daughter of the late Mary (Irvine) Mann and of the late Shanley Mann. She is survived by her 4 sons Bertie of Mann’s Mountain, Deering (Kathy) of Campbellton, Jarvis (Mina) of Mann’s Mountain, and Vaughan of Mann’s Mountain and 1 daughter Debbie (Wilson) of Oakville Ontario and many grandchildren, great-grandchildren, great-great-grandchildren, and great-great-great-grandchildren and many nieces and nephews. Besides her parents she was predeceased by her sons Gary, and Lewis (Cathy), and daughters Zelda (Barry), Glennis (Herbie), Lois (Herbie and companion Doug), and Ardith (Donald). She will be missed by her many friends, neighbours, and all who knew her. A funeral service will be held at Maher's Funeral Chapel, 64 Lansdowne St., Campbellton on Tuesday, September 13, at 2:00 pm Visitation will be held at the Maher’s Funeral Home, 33 Lansdowne St., Campbellton on Monday September 12th from 2:00 to 4:00 & 7:00 to 9:00 pm and on Tuesday at the Chapel from 1:00 pm until time of service. The family would like to thank Dr. Yacoub, and all the nurses and staff on the Geriatric and Surgical units at the Campbellton Regional Hospital. Their compassion and caring during this difficult period was outstanding. For those who wish, donations can be made to a charity of their choice. Funeral arrangements are entrusted in the care of Maher’s Funeral Home, Campbellton (506)789-1699 or toll free (855) 404-1699 email: maher.fh@nb.aibn.com
See more See Less