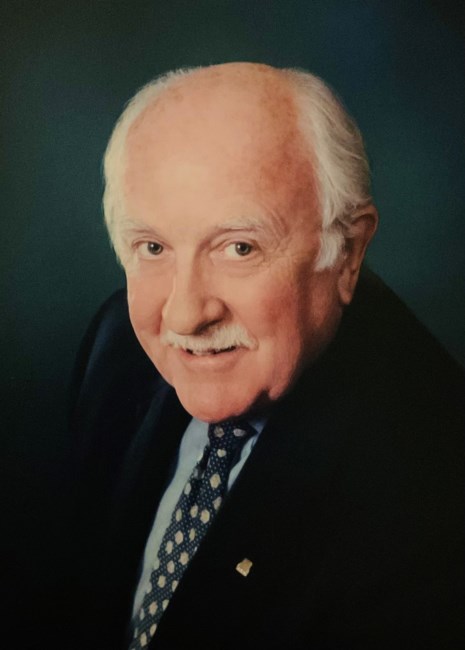 Robert Conley Kraft (Bert) passed away on July 29, 2022, at the age of ninety-five. He was born on September 22, 1926, in Le Sueur Minnesota, the son of Dr. Russell and Doris Conley Kraft. Shortly thereafter, they moved to St. Johns, Michigan where he was raised with his sister and brother. Upon graduation from high school, he joined the U.S. Navy and became a helmsman on the USS Pioneer (AM-105), a minesweeper in the Pacific Fleet during WW II. After honorably discharged in 1946, he enrolled at Michigan State University and earned a business degree on the G.I. Bill. While attending MSU, Bert met the love of his life Florence Ann McConnell and married her on August 19, 1950. They lived briefly in Detroit and then in Port Huron where he began a 43-year career with State Farm Insurance. In 1954, he was transferred to Flint, Michigan as an Agency Manager and then to Houston, Texas in 1981. Bert retired in 1995 and they moved to Stonebriar in Frisco, Texas. Determined to stay busy, Bert went to work part-time for his son John, a State Farm Agent in Plano. His precious Florence passed away in 2004, after 53 years of marriage. Five years later, Bert moved to Highland Springs Senior Living Community in Dallas and continued to work at his son’s Agency. His 68-year association with State Farm ended during the 2020 COVID-19 lockdown. Bert was a beloved role model in the Kraft and McConnell families. His passionate devotion to God, family and country was legendary. He reached out for life in a powerful way, clearly finding immense joy in discovering the unique and positive characteristics of everyone he met. His eternal optimism, profound self-discipline, ethical lifestyle, and the significance he placed on every second of his life was inspiring and contagious. Bert was definitely a man to emulate and will be remembered for always “showing up,” whether for Mass on Sundays, Rotary Club meetings or to support family members and friends whenever possible. He was unquestionably a member of “The Greatest Generation,” and will be sorely missed. Over the years, Bert became Eagle Scout, an accomplished musician (drums), a member of the Sons of the American Revolution and earned his Chartered Life Underwriter designation from Bryn Mawr College. He was a Past President of the Sales and Marketing Executives Club and a member of the Kiwanis International Club in Flint. In Texas, he was the Chair of Membership for both the Houston Space Center Rotary and Plano Metro Rotary Clubs. He often spoke of his 34 years of perfect attendance at Rotary Club meetings! He spent countless hours in volunteerism including as a tutor for young students struggling with reading. In addition to his parents and wife Florence, Bert’s sister Dorothy Millman (Bill), brother Jim Kraft (Linda), and thirteen beloved McConnell brothers and sisters-in-law preceded him in death. He is survived by his brother and sisters-in-law Richard and Helen McConnell of Kalamazoo, Michigan and Tean McConnell of Rosebush, Michigan; his cousin Marie Skistad of Ellensburg, Washington; his children Robert Kraft (Patricia) of Chenequa, Wisconsin, daughter Mary K. Shanahan (Gary) of Austin, Texas, son John Kraft (Nancy) of Plano, Texas; grandchildren Kelly Petroff (Michael) of Marietta, Georgia, Robert Kraft of Milwaukee, Wisconsin, Sean Kraft (Jill) of Bronxville, New York, Megan Gray (Matthew) of McKinney, Texas, and J. R. Kraft (Jill), Michael Kraft (Stephanie), Billy Kraft and Patrick Shanahan of Austin, Texas. He also is survived by thirteen great-grandchildren and thirty-eight Kraft, McConnell and Millman nieces and nephews. The Kraft family would like to acknowledge the outstanding community, staff, and caretakers of Highland Springs, where Bert acquired wonderful new friends and an engaging lifestyle in his later years. He was blessed to have received highly skilled end of life assistance these past months in Memory Care. Visitation will be held from 6:00 to 8:00 pm on Friday, August 5, 2022, at Ted Dickey West Funeral Home, 7990 President George Bush Turnpike in Dallas. On Saturday, August 6, 2022, a Rosary will be said at Christ the King Catholic Church, 8017 Preston Road also in Dallas, before The Mass of Christian Burial which will be celebrated at 10:00 am by Reverend Anthony Lackland and Reverend Ray Cotter. Pallbearers include Bert’s eight grandchildren. If desired, memorials may be directed to The Catholic Foundation of Dallas, 12222 Merit Dr #850, Dallas, TX 75251, John Paul II High School, 2201 W. Plano Parkway, Suite 300, Plano, Texas 75075, or St. Gabriel's Catholic School 2500 Wimberley Drive, Austin, Texas 78735.
See more See Less

In Memory of Robert Conley Kraft