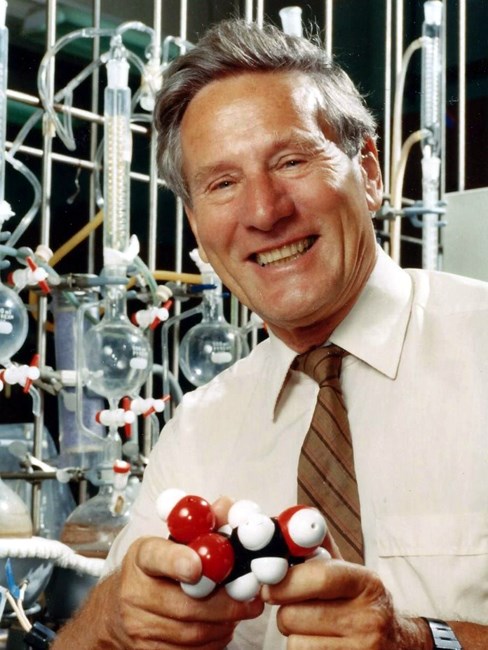 It is with deep sadness that we announce the loss of Ronald (Ron) James Gillespie. He passed away very peacefully, his wife Marcelle by his side, at Wentworth Lodge in Dundas. He is also survived by his daughters Ann (Stewart Patch) and Lynn (Geoffrey Levin) from his previous marriage to Madge (d. 2008). He is predeceased by his brother Alan (London, UK) and sister Jean (Paris, France). Ron was born and spent his school years in London, England. Interested in science from an early age, he studied at University College London, where he obtained his PhD in Chemistry and was appointed as Assistant Lecturer in 1948. In 1949, he met Madge Garner on a Rambler’s Club hiking trip to Switzerland. It must have been love at first sight, as they were married the following year (July 7, 1950) at the Northampton Town Hall (Madge’s hometown). In 1953, Ron was offered a 9-month Commonwealth Fund Fellowship to work at Brown University, Rhode Island. Provided with a car and travel funds, Ron and Madge spent the following summer car-camping across the US and eastern Canada, one of many international adventures they would share. In 1958 Ron accepted a faculty position in the Department of Chemistry at McMaster University, and moved his young family to Dundas, Ontario. Ron had a long and successful career in both research and teaching. His first-year university chemistry text book helped modernize the teaching of chemistry. His VSEPR model of molecular geometry is widely used and taught today. The many graduate students and post-doctoral fellows trained by him became professors or professional chemists at institutions throughout the world. Ron and his family enjoyed sabbatical and study leaves in England, France, Germany, Switzerland, Australia, New Zealand, and India. After 30 years at McMaster, Ron retired from teaching in 1988, but continued to further his research, publishing numerous articles and several books. Ron’s distinguished career in inorganic chemistry garnered him many awards and honorary degrees. Most notably, he was elected Fellow of the Royal Society of Canada in 1965, Fellow of the Royal Society, London in 1977, and received the Order of Canada in 2007. Ron always found time to spend with family, imparting his love of the outdoors, adventure, and travel. Camping on Georgian Bay, family ski trips, hiking the Bruce Trail, and long camping trips across North America and Europe will be very fondly remembered. Ron and Madge shared a wonderful passion for travel and learning about different cultures, and enjoyed Scottish country dancing with friends. Ron was also an avid sailor, seriously racing his Wayfarer dinghy with the help of his students and winning many trophies. In retirement, he and Madge spent many happy summers sailing around Georgian Bay on their “floating cottage.” In June 2008, Ron sadly lost Madge. Later in 2008, he moved to the Amica Dundas retirement residence, where he was most fortunate to meet the second love of his life, Marcelle Roy. They shared many interests, including world travel, and enjoyed summers at her Georgian Bay cottage. They married in December 2010 and lived together at Amica until Ron’s declining physical health necessitated a move into Wentworth Lodge in Dundas. We are most grateful for the excellent care that Ron received there, especially during the difficult months of lock-down due to COVID-19, including his final weeks in palliative care. A celebration of life will be held when large gatherings are allowed. In lieu of flowers, donations in Ron’s memory to Wentworth Lodge (41 South St W, Dundas ON L9H 4C4) or the Hamilton Conservation Foundation (https://hamiltonconservationfoundation.ca/donate) would be greatly appreciated. Online condolences may be made at www.marlattfhdundas.com
See more See Less

In Memory of Ronald James Gillespie