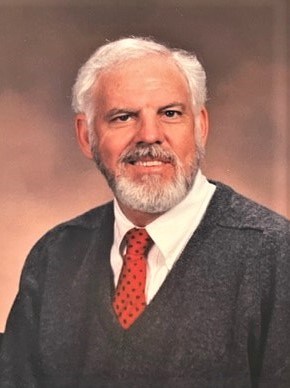 Dr. Jimmy Louis Stanford died peacefully in his sleep on November 30, 2022 after a lengthy battle with Alzheimer’s. Jimmy was born June 22, 1937 in beautiful Loretto, TN to Jessie and Mary (Kellum) Stanford. He was one of the youngest of thirteen children and it was on the family farm that he learned to work hard and fast, traits that distinguished him throughout his life. He and his siblings enjoyed one another and remained close friends throughout their lives, seeing one another regularly at gatherings filled with jokes and peals of laughter. Jimmy graduated from Loretto High School in 1956, completed his undergraduate studies at the University of Tennessee in Knoxville, and received his doctor of veterinary medicine degree from Auburn in 1964. Jimmy attributed his desire to be a veterinarian to having been raised on a farm where he developed his love for animals. Jimmy served in the Air Force for three years upon receiving his DVM. Jimmy married Judith Ann (Lyle), the love of his life, when they were 19 and 17. After exchanging vows in the living room of a Baptist preacher, they shared a picnic on the side of the road to celebrate their new life together. Their marriage matured in the soil of unconditional love, unwavering commitment, and hard work toward a shared vision. Jimmy and Judy have three children, eight grandchildren, and nine great grandchildren. Jimmy’s entrepreneurial spirit inspired him to found six veterinary hospitals throughout Chattanooga and surrounding areas beginning with Ashland Terrace Animal Hospital in 1968. Each of the practices that he established flourished under his leadership and commitment to standards of excellence and continues to thrive to this day. He was a leader in the veterinary field, receiving the distinguished Practitioner of the Year award by the Tennessee Veterinary Medical Association in 1987 and serving in numerous roles, including president, in the Hamilton County Veterinary Medical Association. Jimmy’s crowning role was that of “Granddaddy”. His love for each of his grandchildren and great grandchildren was tangible and they all knew that they were adored by him. He was fun, playful, and has been described as always having a twinkle in his eye; that twinkle never shined brighter than when he was with a grandchild. A teacher at heart, Jimmy loved sharing his skills of hunting and shooting skeet with his grandchildren. Jimmy was a visionary man whose insight and ingenuity motivated endeavors that ranged from choosing locations for new veterinary practices to creating a 40 acre paradise on his home property. His home was always filled with love and laughter and became a haven for family and friends alike. He relished his role of officiating the yearly and highly competitive Easter egg toss. Jimmy was deeply loved and is already greatly missed. He is survived by his wife, Judy; children, Lyle (Susan), Scott (Cindy), and Jill; grandchildren, Sara (Stephen), Justin (Jackie), Beth (Daniel), Megan (Jonathan), Mason (Ashley), Jesse (Cami), Olivia, and Parker; nine great grandchildren; and two of his sisters, Mabel and Geneva (Horace). Jimmy’s family will receive friends on Sunday, December 4, at Chattanooga Funeral Home’s North Chapel from 4:00-6:00 p.m. A memorial service will be held at the North Chapel on Monday, December 5 at 8:45 a.m. with his burial immediately following at the National Cemetery at 10:30 a.m. In lieu of flowers, please send donations in honor of Dr. Jimmy Stanford to the Alzheimer’s Association of Chattanooga at 7625 Hamilton Park Dr. Chattanooga 37421. The family would like to thank everyone who loved and visited Jimmy during his final years with Alzheimer’s. We would like to give a special recognition to Tracy Sneed and all of the loving staff at Remember Me Senior Care in Cleveland, TN, who cared for him with joy and dignity throughout his final months. We are forever grateful for them. Please share your thoughts and memories at: www.ChattanoogaNorthChapel.com Arrangements are under the care of Chattanooga Funeral Home North Chapel, 5401 Highway 153 Hixson, TN. 37343.
See more See Less

In Memory of Jimmy L. Stanford