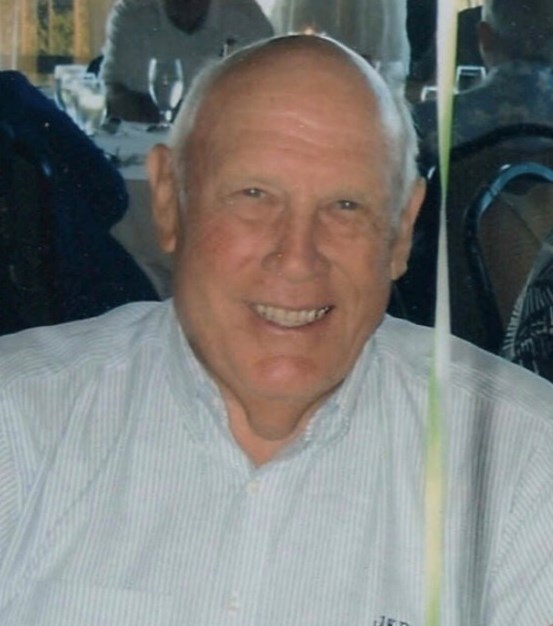 Joe King Pearce was born on August 4, 1930 to Rex and Leone Pearce of Cotton Plant, Arkansas. His brother Rex was four years older. Joe and Rex spent their childhood playing football and baseball in Cotton Plant. They would often hitch a ride on a cotton wagon into town. Joe and his dog Monkey were well-known citizens of Cotton Plant. Joe graduated number 12 in his class – out of 12 students. He served as his high school class President and excelled at several sports. Joe hitchhiked to Arkansas State Teachers College with his cardboard suitcase in hand hoping to get a football scholarship, which was the only way he would be able to afford to attend college. He impressed the coaches and received a scholarship for tuition and worked in the locker room to pay for books and meals. While in college, he met his brown-eyed beauty, Martha Jo Mattox and his heart went pitty-pat. He also played football and baseball and was offered a contract with the Major League’s Boston Braves. While playing ball and being acknowledged by Ty Cobb as one of the best new players, Joe was drafted to serve his country in Korea. He was proud to serve and protect the United States of America. He received the Bronze Star for his outstanding leadership ability and his personal interest in his men. His heroic actions resulted in many successful missions. Following his service in Korea, he completed his college education and married Martha Jo on October 29, 1954. Joe was offered a job at JC Penney following graduation where he worked his way up from the sales floor to becoming a district manager and representing the company in Washington, D.C. He retired from the company after 30 years of service to live in Lakeway, Texas where they were close to good friends. They made many more great friendships in their 25 years in Lakeway playing golf and bridge and attending the Lakeway Church. Martha Jo and Joe have 3 children who are the light of their lives. As the children were growing up, they could often be found spending weekends and vacations in Caldwell, Texas enjoying time at the ranch and spending time with their friends and neighbors in the country. Owning land was a lifelong dream and Joe loved walking the fence-line, tending to his cattle, riding his horses, and entertaining anyone who wanted to come for a visit. Seven years ago, Joe finally fulfilled his dream to live at the ranch. Martha Jo and Joe built a beautiful home and enjoyed their years in the country where they renewed friendships, made many new ones, and were active members of the Caldwell Church of Christ. Everyone who knew Joe loved him for his kindness, he wisdom and good advice, and his strong family values. He is well respected for his accomplishments as a soldier, a businessman, a friend, a father and a husband. He will be missed by all who knew him and especially by his loving family; his wife, Martha Jo, his children, Andy, Jo Ann and Mary Ellen, their spouses, Terri, Ron and John and his grandchildren, James, Allison, Jackson, Jeremy and Megan. Memorial services will be held at 2:00 p.m. on Thursday, January 9, 2020, at Lakeway Church, 2203 Lakeway Blvd., Lakeway, TX. Memorial contributions may be made in Joe's name to the St. Jude Children's Research Foundation at www.st.jude.org/ 
See more See Less

In Memory of Joe King Pearce