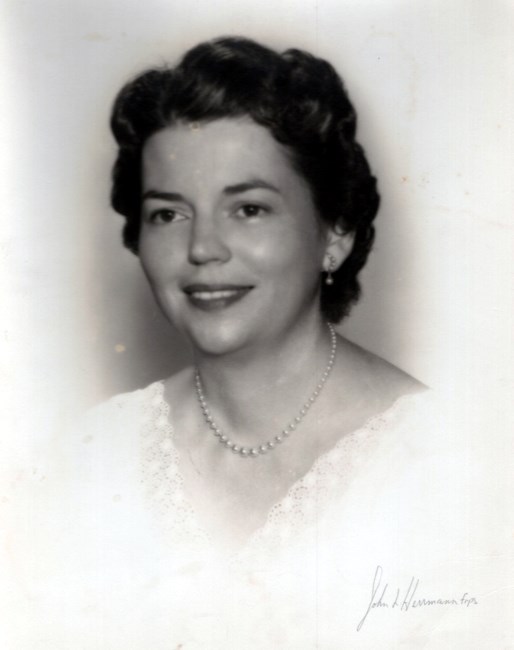 Surrounded by her loved ones, Mary Lachin LeBlanc died peacefully at her home on Sunday January 7, 2018, at 95 years of age. She was predeceased by her husband, Joseph Wilfred LeBlanc, Jr., her parents Victor Guido and Sara Marello Lachin, and her three siblings, Albert Angelo Lachin (Lorraine), Gloria Lachin Mouledoux (Warren, Sr.), and Victor Guido Lachin Jr. Mary leaves behind her five loving children: Dennis (Meridith), Larry (Marguerite), Louise Newman (Bob), Therese, and Mary Ann (fiancé Michael Psarellis) to cherish her memory. Also surviving her are seven grandchildren and numerous great grandchildren. At the age of 15, Mary was graduated from Eleanor McMain Senior High School and at the age of 19 from Ursuline College, both with honors. She remained active with the Ursuline Alumnae and the Old Ursuline Convent Guild. For her strong Catholic faith and her countless years of volunteer work with St. Vincent DePaul Society, Mary was awarded the St. Louis Medallion for the Order of St. Louis by the Archdiocese of New Orleans. She was active in her parish church of 67 years, St. Rita, where she was a proud recipient of the St. Rita Sodality Award. Over the years, Mary was both a Jesuit and an Ursuline room mother for her children. She was an avid bridge player for more than 60 years, a crossword puzzle wizard, member of the Catholic Alumni Club, the Garden Sprouts, and the Catholic Bookstore, serving on its board and as its president for many years. In 1973, upon entering the empty-nest phase of her life she began working at the Special Collections Division of Tulane University’s Howard Tilton Memorial Library. Because of her knowledge of, and expertise with, its Carnival collection, she fondly became known by her boss and co-workers as the ‘Queen of Carnival’ and was mentioned by both Henri Schindler and Arthur Hardy in their writings. Mary did not retire from her position at Tulane until after Hurricane Katrina. A passionate traveler, Mary, her husband and parents sailed to Europe on the Andrea Doria in the spring of 1956. It was one of the ship’s last voyages as it sank to the bottom of the Atlantic Ocean later that year. We thank her caregivers, Monique, Katrice and Terry. A Mass of Christian Burial will be offered on Saturday, January 13, 2018 at Lake Lawn Funeral home. Visitation at noon, services at 1pm. In lieu of flowers, Mary has requested donations to the Catholic Bookstore, 3003 Carrollton Avenue, New Orleans, LA 70118 or the Ursuline Academy Alumnae Association, 2635 State Street, New Orleans, LA 70118. To view and sign the guest book, visit www.lakelawnmetairie.com.

In Memory of Mary Lachin LeBlanc