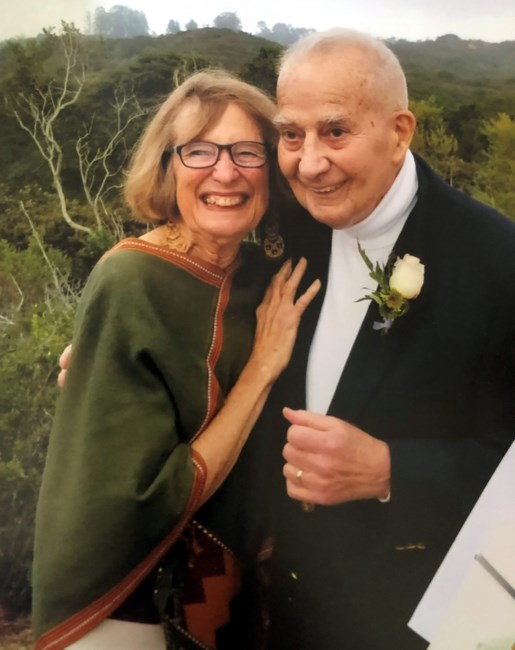 Dr. David L. Fried, Ph.D., age 89, of north Monterey County, passed away peacefully at home on May 5, 2022. He leaves behind his beloved wife Diann, his 3 children, Robin Fried, Nathan Fried and Jessica Walker, his 4 granddaughters, Samantha Walker, Abigail Shaffer, Layla Walker and Rosie Fried, and his sister Marion Solomon. His dear extended family included his daughter-in-law Samantha Fried; his step-children Susan Russell and Steve King, Mari and Klaus Kloeppel, Stuart and Tina Russell; and step-granddaughter Jasmine Russell and step-great grandson Kainalu Russell. David was born in 1933 in Brooklyn, New York, to Jewish immigrant parents, Sam and Clara. He had an early love of learning which flourished throughout his life. His sister remembers that at an early age his friends called him "the professor". As a young teen he taught himself calculus while pumping gas at his parents' service station in New Jersey. He attended Rutgers University, culminating his studies with a doctoral degree in Physics. His career in the field of Adaptive Optics was long and rewarding. David was first employed by RCA Astro-Electronics Division, then by Rockwell International Autonetics Division before founding the Optical Sciences Company in 1970. He authored and co-authored numerous technical papers, and is often cited owing to his development of the Fried Parameter, r0, which allows for the characterisation of atmospheric turbulence in astronomical seeing. David served for 20 years on the U.S. Army Science Board and was a member of the standing committee on ballistic missile defense. He played a key role in the development of laser guide star technology, for which he received the SPIE Technology Achievement Award in 1993. In his retirement he was a professor of physics at The Naval Postgraduate school in Monterey, California. David was a polymath. His significant library is filled with volumes from subjects including but not limited to: poetry, science, biography, history, political thought, literature, fine art, mathematics, and language. David's family appreciates that he shared his love of reading and learning with all of us. He would often quote from memory lines from poetry, literature, and speeches. There are fond childhood memories of him reading stories in his most dramatic voices. His loved ones will remember how he would make time to help tutor, especially in science and math, as well as help revise many an essay. Countless extended family and friends thank him for his ceaseless encouragement and assistance in their academic careers. David was an enduring patron of the arts. He spent his entire adult life collecting paintings and other pieces of art. David appreciated the performing arts as well and maintained a box at the San Francisco Opera House. He traveled the world extensively for both business and leisure. He enjoyed fine dining and took great joy in hosting celebrations that brought together friends and family for gregarious and spirited conversations. Dr. Fried was a true American patriot. He deeply valued the life and opportunities his parents were granted as immigrants in the USA. Throughout his life, David contributed to the ideas, ideals and protection of the United States of America. He served in the US Army as a Private First Class. He served on the Army's Science Advisory Board for 20 years. He believed that political involvement is a civic duty and was active in local initiatives such as Prevent the Airport Through Chino Hills ( PATCH) and provided citizen input for over ten years for the Monterey County General Plan Update process advocating for sustainable community planning. As a founding member of the organization Friends, Artists and Neighbors of Elkhorn Slough (FANS) David worked hard on the restoration and preservation of the slough and its watershed. He will be interned at the California Central Coast Veterans Cemetery. Services will be private. In lieu of flowers, please consider making a donation to Friends, Artists and Neighbors of Elkhorn Slough, PO BOX 180, Moss Landing 95039. Fond memories and expressions of sympathy may be shared at www.thepaulmortuary.com for the Fried family.
See more See Less

In Memory of David Larry Fried