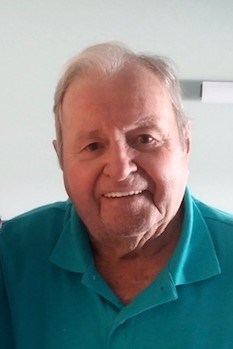 Bill was born on September 30, 1926 in North Fryeburg, ME, where he graduated from Fryeburg Academy. After serving in the Army during World War II, he attended and graduated from Maine Vocational-Technical Institute in 1950.

Bill married Jeannine Doyon, the love and light of his life, on April 15, 1950. Jean fell in love with Bill on their first date when he impressed her with his dancing skills. Together they raised six children. Bill was a dedicated and loving husband and father. He worked as a machinist for 30 years, founding MTM Corporation in 1979 where he worked with his son until he retired in 1991. Bill was a hard worker, never missing a day on the job. He was a great teacher to all who were eager to learn the trade. After retirement, Bill and Jean spent the next 30+ winters in Nokomis Florida, and summers at Long Lake in Maine, where they enjoyed time with their families and friends. Bill, lovingly nicknamed “Trailblazer”, was passionate about many things and especially loved snowmobiling in the White Mountains with his family, his brother Hal and his nephew Greg. He was an avid fisherman, a skilled golfer, bowler, horseshoer and shuffle boarder. He enjoyed playing cards and was always ready for a game of Pinochle or Cribbage.

Bill is survived by his wife Jeannine of 71 years, his son William Thurston and wife Christine of Coventry, CT, and his four daughters, Elizabeth Eddy and husband David of Nokomis, FL, Linda Gannon and partner David Lucas of Stuart, FL, Lisa Wilson and husband Bob of Nokomis, FL, and BJ Hooker of New Smyrna Beach, FL; his brother Hal Thurston of North Fryeburg, ME, his two sisters, Susan Gerry, and Pat Mollica with husband Russ, 16 grandchildren and 15 great-grandchildren, along with many nieces and nephews. He was preceded in death by his parents, Harold and Ida Thurston, his daughter Debbie Thurston-Nolan and his son-in-law Brian Hooker.

A Celebration of Life service will be held the week of November 22, 2021 in Nokomis, Florida. In lieu of flowers, donations may be made to King’s Gate Club in Memory of Bill Thurston, 290-B Avenue of Kings, Nokomis, FL 34274.

In Memory of William F Thurston