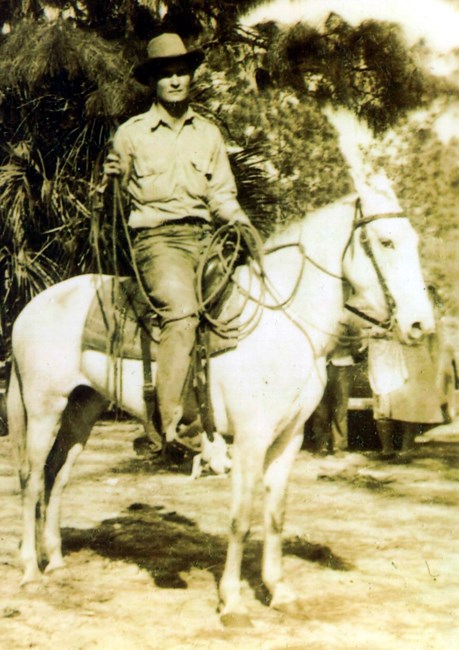 William Freeman “Junior” Underhill, age 97, of Sarasota, Florida passed away on Sunday, May 8, 2022. Junior was born April 27, 1925, in Upthegrove Beach, Florida. Junior was the middle child of 13. He was born at home in Upthegrove Beach on the shores of Lake Okeechobee. He was a seventh generation Floridian, son of a pioneer Florida family of both English and Spanish origin. His first job was building the road “Nine Mile Grade” in Okeechobee County for the depression era Worker’s Progress Administration (WPA). From there he went to work for Lykes Brothers for $20 per month as a cowboy in Brighten. That marked the beginning of what would be his profession as a cattleman which would span the rest of his life. He eventually began acquiring his own herd and leasing various parcels. He met Lois Letson in 1947 who would prove to be his lifelong partner after they married in 1952. In 1965, he met with Mrs. Grace Palmer, (widow of Honoré Palmer) owner of the then active Palmer Ranch. They came to an agreement, and he leased that property operating his ranch on the 13,000+ acres through successive owners until the late 1980’s when major development began. He acquired property in Desoto County and continued ranching and diversified into citrus through the rest of the eighties and nineties. In his later years, his greatest joys were engaging in projects on his ranch homestead in East Sarasota and spending time with his family. He was a member of Sarasota County Farm Bureau and the Sarasota Cattlemen’s Association. He passed quietly and peacefully in his sleep at home Sunday, May 8th. He is survived by his loving wife of 69 years Lois Underhill, children Todd Underhill, Wayne Underhill, and daughter-in-law Mary Rawls Underhill. He is preceded by his parents Freeman & Mary Underhill and 10 of his 12 siblings. A visitation will be held Monday, May16, 2022 from 10:00a.m. to 11:00a.m. at Robert Toale and Sons Funeral Home at Palms Memorial Park, 170 Honore Ave, Sarasota, FL 34232. Followed by a Funeral Service at 11:00a.m. Graveside Burial will be at Palms Memorial Park 170 Honore Ave, Sarasota, at 12:00p.m. In lieu of flowers, the family is asking that donations be made in honor of WF Underhill, Jr. to Tidewell Hospice (https://tidewellfoundation.org/donate/). Fond memories and expressions of sympathy may be shared at www.palmsrobartsfuneralhome.com for the Underhill family.
See more See Less