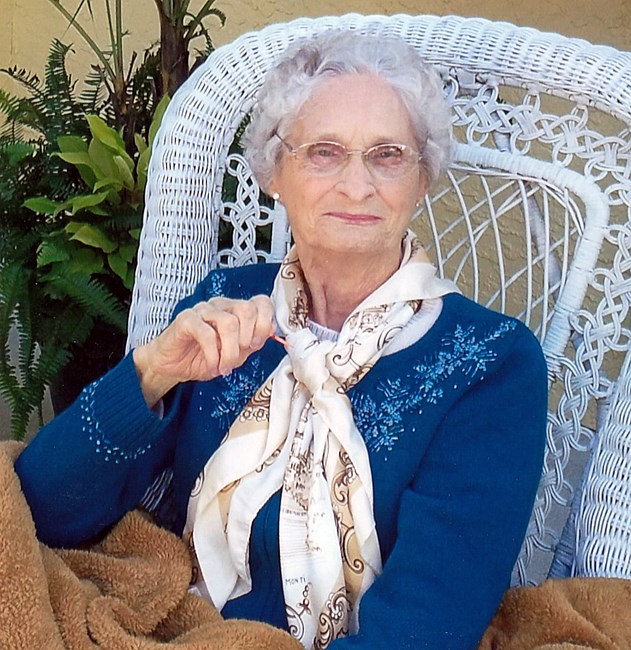 Evelyn F. Knight was born in Sumpter Township, Michigan on April 20, 1929 to Wallace and Adelaide (Theisen) Pegouskie. She was 1 of 11 children raised on a farm in Sumpter Township and Willis, Michigan. She attended grammar and high school at the Lincoln School in Willis. Evelyn spent her youth doing farm chores and selling produce at the Eastern Farmers Market. Her children and grand children delighted in hearing of her experiences and adventures as a Michigan farm girl. During the war Evelyn worked at a restaurant called “The Bomber” because it catered to workers at the nearby Willow Run Bomber Plant. This is where she met the love of her life, Jim Knight. They were married in 1947 and enjoyed each other and shared adventures for over 45 years. In the early years of their marriage, Jim and Evie lived in Willis, Sumpter, Belleville and Wayne, Michigan before settling in Westland where they raised 6 children. Jim Knight was a mechanic for American Airlines and Evelyn worked at the Ramada Inn near the airport. When they retired in 1981, they moved to Lewiston, Michigan where their primary retirement activity was to build a house all by themselves. Seeking to enjoy a warmer climate, they moved to Wesley Chapel, Florida in 1984. By this time they we well into their 60’s but Jim and Evie built another house all by themselves. Jim died in 1994. Evelyn lived in Florida for 38 years where she enjoyed the constant company of her children, grandchildren and great-grandchildren. During her last 15 years she shared a house with 2 of her widowed daughters. The home of the “Golden Girls” was always lively and entertaining! We are extremely grateful that Mom had good health up to the last weeks of her life. Although she had her share of medical challenges to endure, her “farm girl” toughness allowed her to bounce back. She was proud and thankful that at 93 years old, she didn’t have to use a walker or take any prescription pills. In addition to enjoying her family, Evelyn was avid gardener. She was always willing to show off her tomatoes, okra and peaches and never tired of talking about her garden. Two weeks before she passed she was in her garden tending to her crops. Evelyn was a member of St. Mark the Evangelist Catholic Church and was a devout catholic her entire life. When God called her to his side she was ready to join him and all the loved ones called before her. Evelyn is survived by her children Sharon Moers (John and Lynn), James Knight (Denise), Diane Farmer (Ron), Connie Berean (Mike), Tammy Gonzalez (Ed) and Sandy Knight. She is also survived by sisters Margaret Adiks (Chuck) and Elsie Walters (Don) and a brother Jack Pegouskie (Carol). Evelyn has 13 grandchildren and 19 great-grandchildren and numerous nieces and nephews. A visitation will take place on Thursday, August 4, 2022 from 5PM to 7PM with a rosary service beginning at 6PM at Gonzalez Funeral Home. A funeral mass will then take place on Friday, August 5, 2022 at 10AM at St. Mark the Evangelist Catholic Church with internment to follow at Calvary Catholic Cemetery in Clearwater, FL.
See more See Less

In Memory of Evelyn F Knight