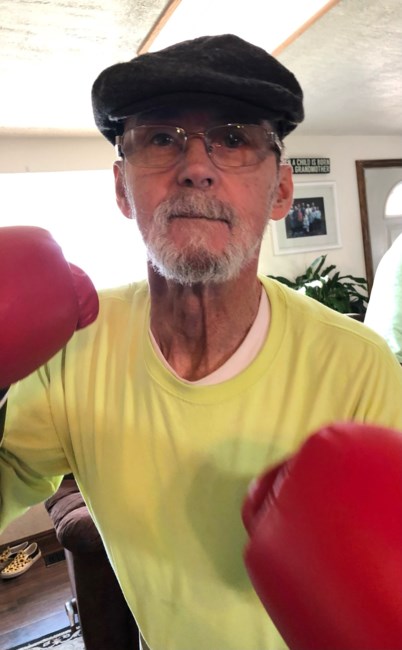 ROBERT RAY BUTCHER Sunrise: March 13, 1947; Sunset: July 23, 2022 It is with extremely heavy hearts that we convey the passing of our dearly beloved husband, father, grandfather, brother, uncle, nephew, & friend, Robert Ray Butcher. Rob left this mortal life in the early morning hours of Sat. July 23rd 2022 due to complications from Parkinson’s disease. He had been valiantly fighting its effects for over 13 years. Rob was born March 13th 1947 to Beulah Butcher and was raised by his maternal grandparents Theodore Charles Butcher and Norma Christensen Butcher with his aunts and uncles and his brother Randy. Rob attended school in Salt Lake and very proudly attended Cyprus High in Magna, UT. He worked hard and received his GED while serving as a Ranger in the 1st & 30th Infantry Division of the United States Army in Germany during the Vietnam War. After serving in the Army, he met and married the love of his life, Dawn Ireta Allen on June 16th, 1972. Their marriage was later solemnized in the Salt Lake Temple on June 16th, 1989. They recently celebrated their 50th Golden Wedding Anniversary at a camping trip with the family. Rob and Dawn were blessed with 4 children: Greg, Jared, Melissa and Jennifer. To these children came 10 awesomely beautiful and talented grandchildren; Jordan Case (Jayden), Cade Lyle Boynton, Andrew Dana Nelson, Tehl Gregory Butcher, Payton Robert Butcher, Nikyla Lael Nelson, Sadie Jane Boynton, Teagan Lee Butcher, Jonas Remy Nelson and Carson Owen Nelson. Later in his life, Rob felt blessed to learn of his biological father, Robert Clark. He was also genuinely happy to be united with another son, Robert Long and his wife Sherri, his son Alix (Mandi) and their son Jameson. Rob truly accepted and cherished the relationships he had with these two special men and the extended family that followed. Rob was a dedicated Elder of the Church of Jesus Christ of Latter Day Saints and served many callings involving the Church youth. He loved serving in the Jordan River Temple before his medical condition made it difficult to continue. Rob was an excellent protector, provider and teacher for his family and often worked several jobs at a time. He retired from 3Form in 2009. He previously worked at Kennecott, Trane Air Conditioning, State Trailer Supply, Tooele Army Depot, PHE Plumbing, Gus Paulos, Warner Steel and Gagon Bros. along with many others. He especially loved his retirement job as a school crossing guard at West Valley Elementary and loved seeing the many children every day, he said it made him feel young and loved. Rob developed many skills in his lifetime; mechanic, plumber, welder, woodcrafter, fabricator and builder. He had the talent and the common sense to be able to figure things out in his mind and repair almost anything. Rob loved building projects for his family and friends, especially the beautiful bird houses he designed and built. Some of his other hobbies and pastimes were anything involving being outdoors, such as camping, fishing, deer hunting and metal detecting. He very much enjoyed watching the Chicago Bears and Utah Utes play football and he loved watching his grandkids play all types of sports and activities. He was very proud of his grandkids and wasn’t shy to brag them up. They all meant the world to him!! Rob made friends easily and was a friend to everyone. He was also an admirable prankster. Rob fought a brave fight against Parkinson’s. The family would like to thank Chelsea, Dave, Tammy and Elizabeth at Canyon Home Care and Hospice for their tender loving care. They also want to thank the University of Utah Neurology Dept., especially Jeanette Sherman ARPN,FNP-C for the excellent care and friendship. A BIG thanks also goes out to Rob Matthews and everyone at Rock Steady Boxing at Brickyard Boxing for always encouraging Rob to “FIGHT BACK”. Survivors include his wife Dawn, children: Robert Long (Sherri), Greg, Jared (Jill), Melissa (Justin) Boynton, Jennifer (Andrew) Nelson, 11 grandchildren, and one great grandson, mother-in-law Glenna Allen, sister-in-law Sue Butcher, half sister Bunny Clark and half brothers Robert and Larry Clark. Preceded in death by grandparents, parents, brother Randy, two half-sisters: Karen and Cynthia and many aunts and uncles. Viewing will be Sun. July 31st from 6-8 pm at Valley View Memorial Funeral Home at 4335 W 4100 S West Valley City. Funeral will be Mon. Aug. 1st , 12:00 pm at The Church of Jesus Christ of Latter Day Saints located at 4444 S Early Duke St (5080 W) with a viewing 1 hr prior to services. Interment will follow at Valley View Memorial Park.
See more See Less

In Memory of Robert Ray Butcher