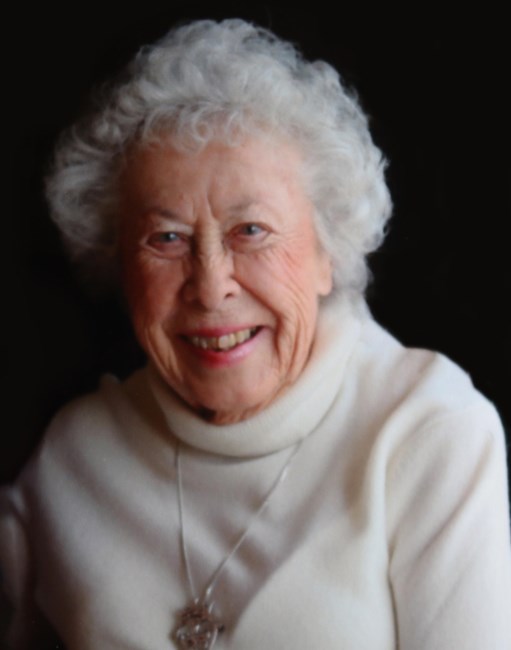 Helen B. Leith, 94, of Golden, CO passed away quietly due to heart failure at Collier Hospice Center on Tuesday, February 19, 2019. Hollywood is where she was born on July 2, 1924. Helen adapted quickly with passion and a smile to a host of international homes that included exotic locations such as Saipan; Tehran, Iran; Djakarta, Indonesia; and Karachi, Pakistan. In the last 43 years she was very involved with the social and civic life in Golden. She wasn’t just a Living Landmark of Golden, her volunteer/community titles were many and include Director of CSM International Friendship Program, Director on the Jefferson Symphony Board, Grand Marshal of Buffalo Bill Days, Golden’s Sweetheart, fundraiser for this and that all in addition to being a Red Hat Society Lady. Helen loved to be involved and get others involved. Helen, Miss Sun and Surf with the USO, married her love, Hal on October 30, 1944 in Alhambra, CA. She was primarily a stay at home Mom and scout leader in foreign countries. However, there was some work with the CIA and State Farm. During 69 years of marriage Helen and Hal lived in Washington D.C., Arlington, VA & then Golden, CO when not living overseas. Helen & Hal retired to Golden, CO in 1976 where their volunteer lives really took off: Jefferson Symphony, Foothills Art Center, St. Joseph’s Church, CSM International Friendship Program, Golden Cultural Alliance, Golden Backpack Program and Family of Churches - really anything for Golden. If you knew Helen you knew in addition to helping others and volunteering, she loved playing and watching tennis. Beloved wife, mother, grandmother, great-grandmother; Helen is survived by children Katherine Leith Porter [Joe], Michael Leith [Beth], Larry Leith [Marci]; son-in-law James Bredar [Stacey]; grandchildren Lori MacKay, Alex Leith, Tommy Bredar, Danny Bredar, Emily Leith, Cooper Leith, Senna Leith, Ally Leith, Mika Leith, Sophie Bredar, Kaia Leith and great-grandchild Rebecca MacKay and brother Robert Bacon [Sally]. Extended family includes Mike, Avie, Ethan and Galena Sheehan, John Gilchrist, Max Peter Fellner, Betsy Wayne and others who have dearly touched her life. Helen was predeceased by her beloved husband and dance partner Hal, daughter Diane Leith Bredar, and parents Elizabeth & Richard Bacon. Funeral Liturgy will be Saturday, March 23, 2019 at 10:00 a.m. at St. Joseph’s Catholic Church, 969 Ulysses, Golden, CO. Graveside services will follow the Mass next door at Golden Cemetery. Immediately following the graveside service lunch will be served in the Parish Community Center. Pallbearers include the grand and great-grandchildren. A contribution may be made in Helen’s name to Golden Backpack Program Inc., P.O. Box 19056, Golden, CO 80402 or on-line at ColoradoGives.org. [Please include: in memory of Helen Leith with your full name and email for a tax receipt] Helen was a stylish friendly witty entertainer and oh so clever story-teller who was an unforgettable humanitarian. She’s now dancing with Hal!
See more See Less

In Memory of Helen B. Leith