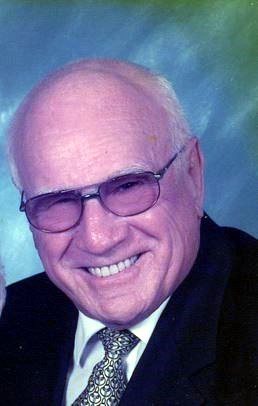 .Normand E. Guerette 1933 - 2021 Normand Guerette, 88, of Auburn, ME, passed away on November 17, 2021, at Maine Medical Center following a sudden illness. Norm was born on October 23, 1933, in Lewiston, ME to Raoul and Marie Louise (Ouellette) Guerette and was the youngest of five children. As a teen, he loved playing baseball and football and was a graduate of the ELHS class of 1953. Following graduation, he served in the US Army during the Korean Conflict. Norm married the love of his life, Mary Jane Asselin, on April 11, 1959, and they were happily married for 62 years. Together they had four children: Dan, John, Ann, and Jeff. Being a kind and dependable husband, dad, pépère, great pépère, brother, and friend was of the utmost importance to Norm. He certainly did not disappoint when it came to wholeheartedly loving his family. Lieutenant "Cookie" Guerette was a police officer for the City of Auburn from 1958 to 1995. He loved serving the City of Auburn and was a staple in the community he served. In addition, Norm served as President of the Auburn Police Benefit Association, Eucharistic Minister at St. Louis Church, Board of Directors at St. Louis Parish Council and New Auburn Federal Credit Union, and member of the Knights of Columbus. After retirement, Norm and MJ enjoyed traveling. Norm loved watching his grandchildren's sporting events, plays, and musicals. He liked going to Auburn Rec men's softball games with his friend Bill Bilodeau and heckling the kids who grew up in the neighborhood. Additionally, he loved getting together with his ELHS classmates for their monthly luncheons. Norm is survived by his wife Mary Jane Guerette; son Dan; daughter Ann Therriault and husband Michael; son Jeff and wife Carolyn; grandchildren Corey Therriault and his wife Abigail, Ian Therriault, Emma, Abby, and Jonathan Guerette, and great-grandchildren Landon and Nora Therriault. Also, two sisters-in-law Mary Ann Vallee and Irene Coady, and numerous nieces and nephews. He was predeceased by his parents; his son, John; a brother, Robert Guerette; three sisters, Lucille Guerette, Muriel Davis, and Carmen Guerette. The family has designated Auburn PAL (Police Activities League - serving at-risk youth) for memorial contributions https://www.auburnpal.com/donate. Visitation Fortin Group /AUBURN Monday 2-6 PM. Funeral Sacred Heart Church Tuesday 11 AM followed by committal at St. Peter's Cemetery. To leave a message in the family's on-line guestbook, please visit www.thefortingroupauburn.com Arrangements are under the care and direction of The Fortin Group Funeral and Cremation service, 217 Turner St. AUBURN, 783-8545.
VER MÁS VER MENOS