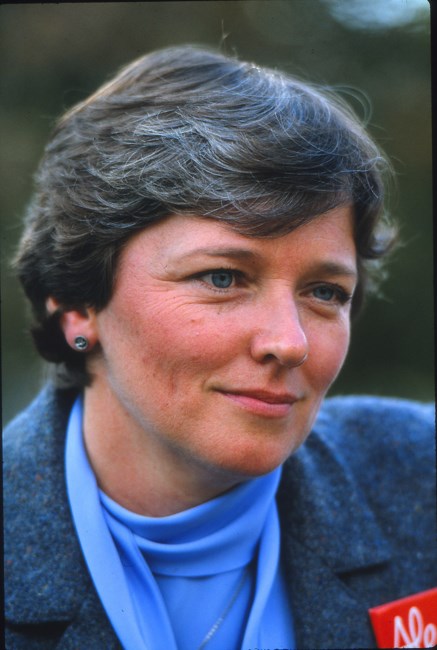 She was born Alexa Ann Shaw in Ottawa on August 11, 1944. She became Alexa McDonough when she married the late Peter McDonough in Halifax in 1966. She began her career in social work as the assistant to the director of Social Planning Department at the City of Halifax in 1969, and later served as a member of the faculty at the Maritime School of Social Work at Dalhousie University. Over the years, she assumed a variety of job titles: Nova Scotia New Democratic Party leader in 1980, Member of the Legislative Assembly in 1981, federal NDP leader in 1995, Member of Parliament in 1997, and Mount Saint Vincent University Interim President in 2009. Over the years, she earned numerous honours, including the Order of Canada, the Order of Nova Scotia and four university honorary degrees. She even had nicknames: the “Iron Angel,” the “Best Premier Nova Scotia Never Had,” “Our Lady of Shocked and Appalled…” But for millions of Canadians, she transcended party affiliation and every other distinction. She was simply “Alexa,” no last name needed, a beloved, respected, and significant player in Canadian life. Alexa McDonough died on January 15, 2022, in Halifax at the age of 77, after a lengthy struggle with Alzheimer’s disease. Alexa came by public service honestly as the daughter of socially committed parents, Lloyd and Jean Shaw, who instilled in their children an understanding that privilege came with responsibility. By the time she was a teenager, she had already launched what became her lifelong commitment to racial and social justice. Her commitment to humanity manifested itself in many different ways. She was always there for those who needed her — for the struggling single mother in her Halifax constituency; for Donald Marshall, Jr. in his fight to clear his name for a murder he did not commit; for the widows and families of the victims of the Westray mining disaster as they — and she — fought for legislation to prevent future similar tragedies; for Monia Mazigh the wife of Canadian engineer Maher Arar, who was disappeared into a Syrian prison for nothing more than being in the wrong place at the wrong time; and for many, many more. Alexa was notoriously late for events and appointments because it seems she never met anyone whose story she didn’t need to hear, whose problems she didn’t want to help solve. Alexa led, not only by blazing her own trail as a female politician, but also by her ongoing efforts to encourage others — women, people of colour, those without privilege — to take their own rightful place in politics and the world. She made room for them. Alexa was a relentless optimist. She could find the seeds of a better next result in electoral defeat, discern yet another small step for progress in every policy setback. She had a moral compass, and it was always pointed at a better, more just, more equal future. “We need Canadians to know that Osama is a Canadian name,” Alexa told a hushed House of Commons in 2001 in the wake of the Islamophobia that followed the 9/11 tragedy, “that Mohammed is a Canadian name, and that worshipping in a mosque is a Canadian tradition.” For all that, she could be wickedly, self-deprecatingly funny, a woman who took her causes seriously but never herself. Her children shared her proudly — and mostly willingly — with the larger world because they also knew their mother would be there for them whenever they needed her. She taught them many life lessons — “How you treat people who can do nothing in return is the ultimate judge of your character;” “Giving back is not an option but rather an obligation;” “What you do for yourself, you take with you. What you do for others, you leave behind;” and “Be grateful. Every day.” They will miss her every day. Alexa is survived by her sons, Justin (Heather) and Travis (Margaret), her brother, Robbie (Jean), and her seven beloved grandchildren: Abbie Jean, Lauchlan, Taylor, Saoirse, Elizabeth, Griffin, and Charlie. In her later years, that next generation became her greatest source of pride, and she enjoyed nothing more than to watch them compete in their various sporting events from tennis and basketball to dance. Special thanks to the healthcare team who looked after her in her final years, especially Dr. Kenneth Rockwood, the countless doctors, nurses and healthcare professionals in various hospitals and the incredible staff at Parkland on the Gardens. Extra special thanks to Alexa’s women friends with whom she shared a lifetime of love, good times and great memories, and who continued to be there for her when she needed them most. Especially Barbara Jack, Laura Whittaker and the women of “Girls’ Night Out.” No gifts, flowers, or cards by family request. Those wishing to honour Alexa’s memory may do so by donating to a local charity of their choice or to any of the many good causes close to Alexa’s heart, such as the Alzheimer’s Society of Nova Scotia, St. Andrew’s United Church, the Alexa McDonough Institute for Women, Gender and Social Justice at Mount Saint Vincent University, the Women in the Legislature Fund, The Africville Museum and the Alexa McDonough Women’s Leadership Centre at the Douglas Coldwell Foundation. Equally, you can give back in any way you can with a kind deed to support someone who needs your help and love. Alexa would appreciate that. Due to CV19 restrictions, a celebration of life will be held at a later date. The family asks that you share your condolences, memories, and thoughts in the online book of condolences at www.jasnowfuneralhome.com so they can be shared and preserved in one central place for legacy purposes. To discover more about Alexa's legacy, you can view this video: https://youtu.be/GO4DucLdBQU https://youtu.be/GO4DucLdBQU https://documentcloud.adobe.com/link/review?uri=urn:aaid:scds:US:2df20cdb-05ab-4dec-80f8-34f4fa652524
VER MÁS VER MENOS