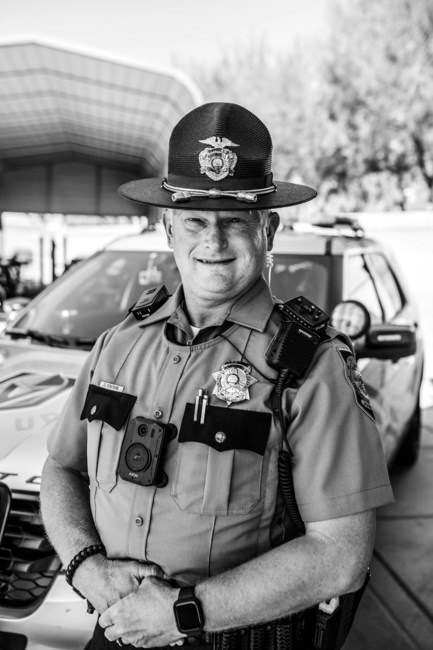 It is with great sadness that the family of Trooper Clifford “Cliff” Vincent Fontaine of Las Vegas, Nevada, announce his passing on November 27, 2021, at the age of 54 after fighting a long and hard battle against Covid-19 related pneumonia. Cliff is preceded in death by his father, CMSgt. Dennis Fontaine Jr., His mother, Barbara Fontaine, and his sister, Deborah Fontaine. He is survived by his wife, Julie Fontaine, his eight children, Bryan, Matthew, Wesley, Meaghan, Madisen (Garrett), Jacob, Lindsey, and Hannah, his sisters Trish (Byron, son Jonathan) Dutton and Tiffany Bridgeman, and his brothers Dennis Fontaine III and Clay Fontaine. Cliff was born on October 10, 1967, in San Luis Obispo, California. His family later moved to Phoenix, Arizona then Manchester, New Hampshire before they settled in Las Vegas, Nevada when Cliff was five. As a kid, Cliff would swim at the Airforce base and play in the desert; building forts and having adventures with his twin brother, Clay. In high school, Cliff served on the Civil Air Patrol doing search and rescue. Cliff graduated from Vo Tech High School in 1985 with an airframe and powerplant license and went to work as an airline mechanic for Delta and Scenic Airlines. During this time, Cliff began his career for Medic West as an AEMT. After leaving his job as an airline mechanic, Cliff went through the Nevada Highway Patrol Academy in Las Vegas. There he received training and was sworn in as a Nevada State Trooper on February 7, 2005. He worked for Nevada Highway Patrol for 16 years. During this time he continued working as an AEMT for Medic West - a career that lasted 20 years. On August 23, 2007, Cliff was baptized as a member of The Church of Jesus Christ of Latter-Day Saints where he served his church community in many capacities. Cliff and his wife, Julie were married on April 6, 2008, and were later sealed for time and all eternity on July 3, 2009. In his free time, Cliff enjoyed high adventure survival situations, camping, going to family events, and spending time with the people he loves most. Cliff will be remembered for his hardworking nature and giving spirit. He was extraordinarily kind, and forgiving. His friends and family remember his brave and adventurous spirit and miss the loving compassion he had for his family, friends, coworkers, and members of his community. Cliff was loyal to those he held close and was a peacekeeper in all the facets of his life. He was an inspiration to many and will continue to inspire those who remember his legacy. A viewing for Cliff will be held at the Latter-Day Saint Stake Center 10070 Azure Dr. Las Vegas, Nevada 89149 on December 7, 2021, from 5 pm - 7 pm. A funeral service will be held at the Latter-Day Saint Stake Center 10070 Azure Dr. Las Vegas, Nevada 89149 on December 8, 2021, at 10 am. From there, Cliff will be escorted to Palm Mortuary after the service for a private cremation.
VER MÁS VER MENOS