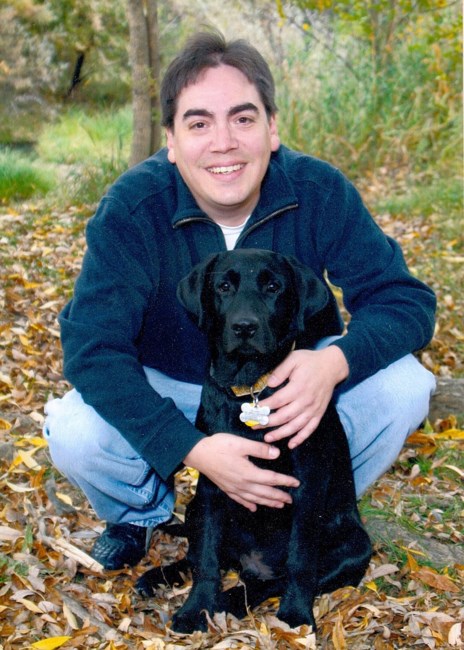 Jeffrey Celio Alexander (Alejandro) Benavidez Chavez was born on December 12, 1969, in Las Cruces, NM to Manuel Chavez and Leola Chavez (Benavidez). He passed away peacefully at his mother’s home surrounded by his family on June 26, 2022. He was 52. A Mass and celebration of his life will take place on Friday, August 5, 2022 with a luncheon to follow. In lieu of flowers the family asks you to consider making a donation in Jeff Chavez’s name to the Longmont Humane Society. A link to their donation page is provided below. Jeff was the second of three children born to Manuel and Leola. As a child the family moved to Perkasie PA following his father’s military career. In 1976 his parents divorced, and he moved with his mother and sister to Longmont, CO where he would stay for the remainder of his life. In 1982, his mother Lee married Theodore (Ted) Cline and through this union, Jeff gained a wonderful stepfather. Growing up Jeff enjoyed playing youth and school sports including basketball, football, and baseball. He attended Longmont High School where he was on student council and played various sports until he graduated in 1987. He had a talent for public speaking and dreamed of being a sports reporter or sportscaster. He was well-liked and known for being funny and a friend to all. After high school Jeff attended Colorado State University and studied Communications. He would go on to have an accomplished career that began in customer service. His friendly personality and easy way with people made him a natural in this profession. His career evolved to corporate training and then client service management for products in the tech industry, where he expertly trained clients on how to use various data-analysis products. He spent over 20 years working in this capacity, splitting time between companies: ABB, YES Energy, and Hitachi, all of which specialized in the energy industry. Well-respected in this field, he was regarded as hard-working, intelligent, and committed. He was often complimented for his patience, work ethic, attention to detail, infectious smile, and big heart. Jeff was an avid sports fan with an affinity for the Denver Broncos, Denver Nuggets, Colorado Avalanche, and his beloved Chicago Cubs. He rejoiced when the Cubs won the World Series in 2016. Jeff also had a deep love of music. He enjoyed live music and attended countless concerts and shows. He particularly loved to experience live music with family and friends and often shared playlists, songs, and concert tickets with them. Jeff loved dogs, and really enjoyed the years he spent with his Black Lab and best pal, Seamus Wrigley. He could often be seen on walks and being pulled around on his skateboard by Seamus. He was heartbroken when Seamus died. Jeff also loved spending time with his nieces and nephews as well as younger cousins who all adored him. He was known to get on their level and play with them. He attended their sporting events, flew kites with them, and once drew a 100-square-long hopscotch game for his niece, Charlotte. He taught his nephew, Elijah, to skateboard and could be heard discussing the pros and cons of nerf guns, princesses, and superheroes with them. He would make up funny nicknames for people he loved. He enjoyed board games and movies with his mom. As an adult he enjoyed building complicated Lego designs for a creative outlet and stress relief. He loved playing fantasy sports and often won his league competitions. Jeff was a loving son, brother, uncle, nephew, and cousin. His fun spirit, loving ways, and giant smile will be forever missed by all who knew and loved him. Jeff was predeceased by his older (infant) brother, John Louis Chavez, grandparents Celio and Stella Benavidez; grandparents Teofilo and Jesusita Chavez; Aunt Chris Evans (Chavez), nephew Tyler Cline, and his faithful and beloved dog, Seamus. He is survived by his father, Manuel Chavez of Metairie, LA; mother and stepfather, Ted and Leola (Lee) Cline of Longmont, CO; sister Jennifer Chavez, niece Charlotte Hartman, and nephew Elijah Hartman of Maple Valley, WA; brother and sister-in-law, Matthew and Maggie Chavez, and niece Estella Chavez of Slidell, LA; brother Jacob Chavez of New Orleans, LA; stepbrother James Cline of Broomfield, CO, stepbrother Rick Cline of Loveland, CO; and nephews Matthew and Patrick Cline of Colorado; uncle Dan Benavidez of Longmont, CO; Aunts: Dolores Benavidez of Rio Rancho, NM; Stella Benavidez of Arvada, CO; Gloria Alderette and Patricia Sanchez of Las Cruces, NM; and Beth Duran of Tehachapi, CA; as well as numerous cousins including Aja Ramos, who was also his dear friend.
VER MÁS VER MENOS