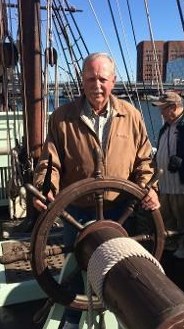 Robert L. Helfers, 75, of Union passed away peacefully on March 11, 2017 in Barrington. Born April 22, 1941 in Elmhurst; he was the son of August and Edna (Rosenwinkel) Helfers. He married Karen J. LoGrasso on September 7, 1963 in Itasca. A member of Zion Lutheran Church and the Seneca Township Liars Club; Bob retired from Seneca Township Highway Department as a Road Commissioner after 15 years of service. Bob was a fan of the Chicago Bears and he enjoyed traveling, being outdoors, restoring tractors and spending time with his family, especially his grandchildren. He is survived by his wife of 53 years, Karen LoGrasso Helfers; son, Michael (Colleen) Helfers; grandchildren, Garrett and Samantha Helfers; sister, Kathy (Harry) Doherty; sister-in-law, Patricia Mellema; and many nieces and nephews. Bob was preceded in death by his parents. Visitation 9 a.m. until time of funeral service at 11 a.m. Thursday, March 16, 2017, at Zion Lutheran Church, 412 Jackson Street, Marengo. Luncheon will be held immediately following the service at the church. Interment will be private. In lieu of flowers, donations can be made to ALS Foundation at www.alsa.org or Zion Lutheran Church. Online condolences may be submitted at marego-unionfuneralhome.com