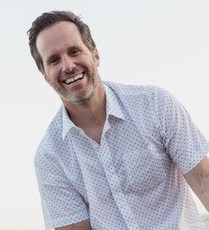 On Thursday, March 3, 2022, Mark Robert Olschefskie left his earthly home and entered the kingdom of Heaven with his family by his side. He entered heaven as “The Best” husband and father, ready to stand before God. He was born in Hartford, Connecticut as a twin, and the second child of three children to Robert and Maureen Olschefskie. His childhood was spent in Glastonbury where he graduated high school in 1996 and continued his college education at Wesleyan on an academic scholarship where he played football and ran track. He was an accomplished athlete, achieving All American in High School and All NESCAC Football Honors for punting. After graduating with a degree in Psychology, Mark and his friends decided to load up and head to Austin, Texas with their plan mapped out on a paper plate. While working for Budweiser downtown, one night in December 2002 the beautiful Kristin Mather who was working the same event caught his eye. As the night progressed, he finally got the nerve to talk to her. Mark was uncharacteristically nervous and slightly intimidated, so he did not make his best first impression. After chasing Kris with his trademark persistence, charm and wit, the two became inseparable and were the definition of best friends. Mark sealed the deal with Kristin, marrying on October 21, 2005. Mark soon began his successful career in the pharmaceutical industry in Austin, TX at Eli Lily. He quickly climbed the ladder of success, eventually transitioning to Amgen in California and finally to Biogen in Charlotte, NC. His career was defined by leadership and mentorship of his teams. Mark's proudest success was his family. Mark and Kristin have two beautiful children that meant the world to him. Henry and Caperton (Capey) were the light of his entire world. Mark was an incredible husband, father, coach, dance partner, karaoke singer, DJ and over all life of the party. His happiest times were spent on the soccer pitch - coaching, cheering and delighting in watching his children. He strived to win and push those around him, occasionally cheating at games and teasing relentlessly. He adored his bride, his “Fefe”. He prioritized their relationship and maintained date night - even if it meant squeezing in a quick lunch or drink during treatment. Mark was diagnosed with duodenal cancer in August 2019. Throughout his cancer journey, his faith and story spread around the world, inspiring so many to Be The Best, to love the Lord, and to live their dash the best way possible. Mark is survived by his wife, Kristin Mather Olschefskie and children, Henry and Caperton of Charlotte, NC; father and mother, Robert and Maureen of Glastonbury, CT; sisters, Lea Lockwood of South Kingstown, RI and Melissa Olschefskie of Glastonbury, CT; as well as many nieces, nephews, extended family and friends. Over the past two years Mark was well cared for by the staff at Duke Cancer Center, Kristin’s mom, Charmaine and the unwavering love and support of his wife. We will celebrate Mark's life on Sunday, March 6, 2022 at 3pm in the chapel of McEwen Funeral Service - Mint Hill Chapel, 7428 Matthews Mint Hill Road, Mint Hill, NC 28227. A reception will immediately follow at Char Bar 7 across the street from the funeral home. Fond memories and expressions of sympathy may be shared at www.mcewenminthillchapel.com for the Olschefskie family.
VER MÁS VER MENOS