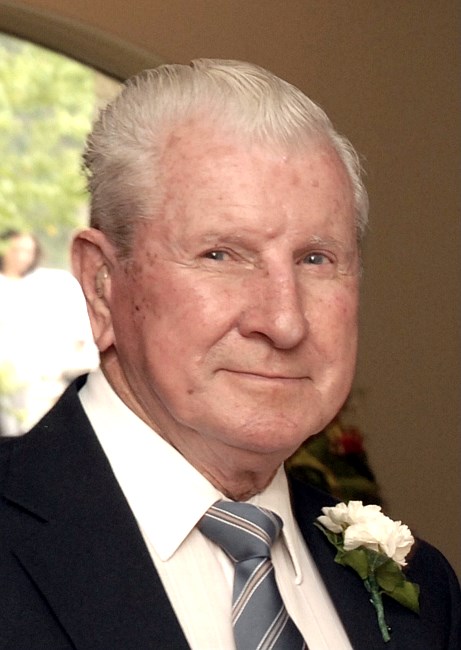 Charles Peter Thomas (Charlie), age 92, passed away unexpectedly at the home of his daughter, Debbie Ozment of Crete, Illinois, on November 17, 2021. Charlie was born on February 25, 1929, in Milford, Delaware. He attended grade school and high school in Milford, where he lettered in baseball, basketball, track and wrestling. He attended the University of Delaware where he was on the gymnastics team.

He was in the Delaware National Guard in the early 1950's.

He worked at International Latex, ran his own service station, and worked at Wharton & Barnard on the road as a salesman and was manager of their Laurel, Delaware store, for almost 20 years. He ran his own business, Automotive Equipment Center, and installed motor vehicle lifts until he was 86. He played the trumpet, in church and also at home for the pure pleasure of it. “Trumpeter’s Holiday” was one of his favorites. On our many road trips, we sang together in the car. He was an avid golfer until his death, loved to bowl, waterski, boat, and camp. He owned an airplane for a number of years and was active in the Delmarva Flying Farmers.

He was active in many capacities at Milford First Baptist Church, Milford, until 1979; and then Heritage Baptist Church, Lynchburg, Virginia, in the choir and Young at Heart for 30 years, until he and Dottie moved to Michigan in 2015. He played softball on the church softball team until his wife made him quit at 76.

A memorial will be held at Blake-Lamb Funeral Home, 4727 W. 103rd Street, Oak Lawn, Illinois, 60453 on December 4 with visitation from 12:00-2:00pm and a memorial service at 2:00pm which will be available via live stream, you can join by clicking the link 5 minutes prior to 2:00pm (not compatible with internet explorer or safari). Visitation and the memorial service are open to all friends and family. https://www.asimplestreaming.com/cpthomas

Contributions may be made to Gideon's International at www.gideons.org/donate, or TEAM https://give.team.org/fundraiser/3232663 to support one of his grandsons, Seth O'Day, on the mission field in the Philippines.