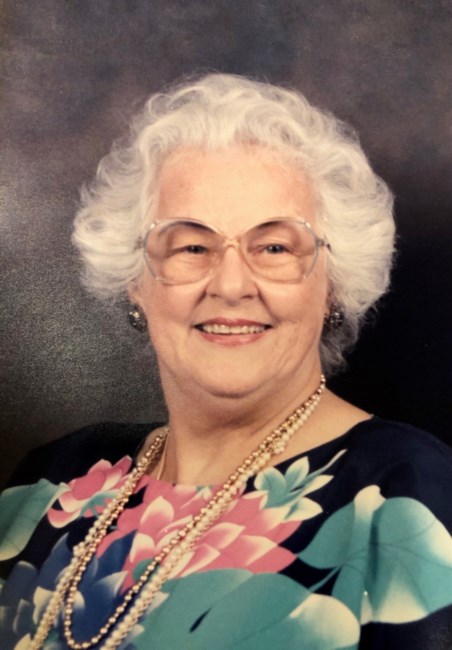 Betty (Elizabeth) Anne Staton was born in Orlando, Florida, on November 8, 1925, at Orange General Hospital (now Orlando Health), and died peacefully at home in Orlando on December 27, 2020. She graduated from Orlando High School in 1943, and Florida State College for Women in 1946. An Orlando native, Betty Anne was the daughter of Sara (Stegar) and Sam Shiver and was married to her high school sweetheart, Ulysses Grant Staton, for 62 years. They enjoyed boating and traveling the world, while raising their three children, and they loved their second home in Burnsville, NC. Betty Anne was a lifelong and very active member of Park Lake Presbyterian Church. She was best known as a pioneer in women's community activism while raising a family and hosting many social events. Known as the “General” to her friends and family, she knew how to organize any event, and usually took charge in doing so. She loved to cook, to entertain, and to play bridge. Betty Anne began her volunteer years serving on committees in the Orange County School System, plus many PTA’s, Additions, and the Bi-Racial Advisory Committee. She was active in the Junior League of Orlando, and President of both the local and State of Florida League of Women Voters. She served 19 years on the Salvation Army Advisory board, two terms as Elder at Park Lake Presbyterian Church, was a Board member of the Central Florida YMCA, and volunteered for the Florida Symphony Society where she helped organize the Opera Gala Guild. She stayed active in her college sorority Delta Delta Delta, and was proud of her Phi Kappa Phi college honor. She was a member of The Rosalind Club and the Country Club of Orlando. Her biggest honor was when she was appointed by Governor Askew to a nine-year term on the Florida Board of Regents, representing UCF, and serving as the first female Vice- chair. She is survived by her sister, Carolyn Shiver Snelling, her daughters Suzanne Bigalke (John) and Sally Kennedy (Bill), and her son Samuel Staton (Meredith Harewood). She has seven grandchildren,Sara Bigalke Glover (Jay), Brady Bigalke (Kristin), Caroline Kennedy, John Kennedy (Hannah), Grant Staton, Nora Staton, Audrey Staton and two Great grandchildren, Evelyn Bigalke, Eden Glover, all of whom she taught to love a grand and glorious Christmas. There will be a small family service at her beloved Park Lake Presbyterian Church February 6th. In lieu of flowers, please contribute to Park Lake Presbyterian Church in memory of Betty Anne Staton. Leave a message or memory for the family at DignityMemorial.com
VER MÁS VER MENOS