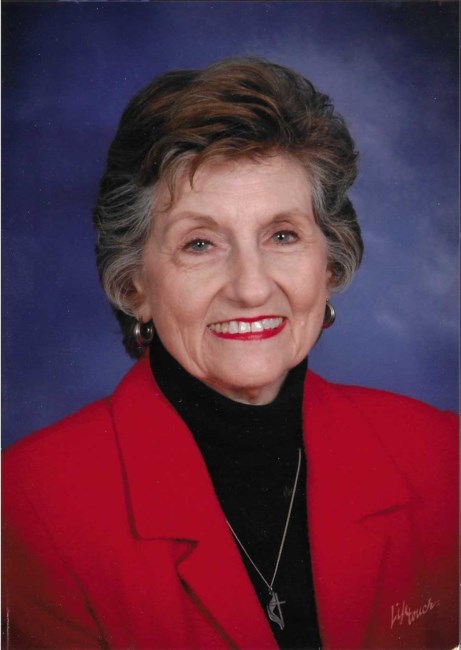 Sara Redding Bailey, 87, of League City, Texas passed away peacefully on Oct. 11, 2021. She was born on Sept. 4, 1934 and was raised by her parents, Hazel Lile Redding and Samuel Redding in Camden, Arkansas. In high school, she was active and honored in many ways, including student council secretary, Girls State, homecoming court, Latin club, “Who’s Who: Friendliest Girl,” and she student-directed the senior play. She graduated from Henderson State University, where she was also on the homecoming court, a class favorite and a member of Alpha Sigma Alpha sorority. It was there that she met the love of her life, Ronnie (R.C.) Bailey. They lived happily ever after for more than 63 years. Their love story is an inspiration. She worked in elementary and middle school education her entire career at schools across Texas, including Dunbar Elementary in Dickinson. She touched the lives of many young people in the area, and was especially fond of sharing books with students. Sara was a long-time member of League City United Methodist Church and was an active volunteer. Over the course of many years, she was a Sunday school teacher, worked on the membership committee, played in the handbell choir, provided meals to families in need, and prepared the elements for communion services. She was also an active member of the League City Garden Club, which was instrumental in creating the beautiful Helen’s Garden on Main Street in League City. She had a passion for her family, friends, playing bridge, baking, and celebrating birthdays. She had a special talent for finding the perfect gift for family and friends. Sara made her home for the past 55 years in League City, along with her husband, Ronnie (R.C.), where they raised three daughters, who love to laugh, and can all catch a fish and bake a cake. Sara was known for her generosity of spirit, genuine warmth, her ability to make anyone feel welcome, and her radiant smile. She was a true “lady “in every sense of the word. She was preceded in death by both her parents and her husband of 63 years, Ronnie Bailey. Her family includes Lisa Bailey Radebaugh (daughter) and her husband, Bob Radebaugh of Austin, Texas; Lindy Bailey Schillaci (daughter) and her husband, Vinny Schillaci, of Nassau Bay, Texas; Carol Bailey Cain (daughter) of Austin, Texas; and her granddaughters Heather Marie Nash and husband Jon Ryan Browning of West Linn, Oregon, Sara Elizabeth Radebaugh and Grace Ann Radebaugh, both of Austin, Texas. Her family also includes Cathey and Ken Turner (sister and brother-in-law) of Little Rock, Arkansas. She also had many nieces and nephews, who all loved their “Aunt Sara.” A service celebrating her life will be held at League City United Methodist Church on December 4 at 2pm. The family sends special thanks to dear friends and family who have shared kind words, food, memories and tributes. In lieu of flowers, please make a donation to League City United Methodist Church or the charity of your choice.
VER MÁS VER MENOS