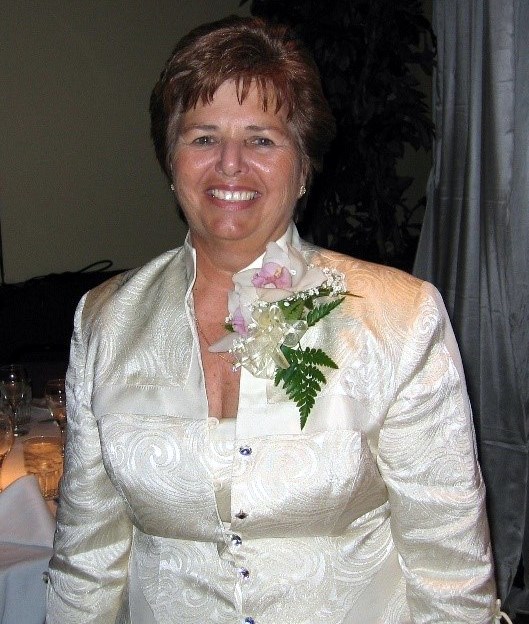 Wife, mother, Grammy, sister, aunt, friend, businesswoman, athlete Born September 18, 1946, in the family home on Johnson Street in Provincetown, to Edgar W. “Gar” Francis Jr. and Celeste V. Francis (Macara). The family moved to North Truro when she was 5 years old. There they owned and operated family businesses at North Truro Camping Area and Lower Cape Bus and Taxi. As a youngster, her first paying job was to chip blocks of ice for customers. She later learned to drive school buses and transported children to and from school and seniors on their shopping trips to Bradlees in Orleans. She even drove her children and their classmates to end-of-year beach celebrations at her house in North Truro. As a young girl, she taught herself to skate at Pond Village. An athlete before her time, she was the rover on the girls’ high school basketball team and was proud to be named a Cape-League All-star. A natural lefty, when playing softball, she would catch the ball in a righty glove and then switch hands to make the throw. She passed her athletic abilities and love of sports onto her children, Michael Jr. and Amy, and her grandchildren, Gabriel, Sophie, Michaela, Zachary, and Devin. She delighted in cheering them on at every ice rink, lacrosse field, and softball diamond in New England, Canada, and Europe. A constant presence at all their sporting events, she was equally elated to get a front row seat at their musical recitals and school productions. A 1964 graduate of Provincetown High School, she attended Bryant and Stratton in Boston and later worked at Capitol Records in Needham where she met many of the top musical artists of the 60’s and 70’s. She returned to North Truro and married Michael Coelho on September 18, 1971, her 25th birthday. Having raised their family in both Provincetown and North Truro, they celebrated their 51st wedding anniversary just days ago. Together, they operated successful fishing and motel businesses. For 30 years, she owned and operated Cape Breeze Motel and Cottages and later, Southwind Court Cottages where repeat customers became lifelong friends. Remembered for her love of and dedication to her family, she was happiest when spending time with them. A generous and caring mother and grandmother, she was thrilled to celebrate holidays and birthdays together and happily traveled across the Northeast to bring her coveted homemade cake to every celebration. Aside from her immediate family, she especially enjoyed her walks and morning coffee with her good friends Susan Souza and Margie Lopes and cherished her visits with her dear friend Nancy Meads. She was thankful to have shared time with her sister, Jo Johnson, daughter-in-law Heather, son-in-law Paul, nieces, nephews, grand-nieces, and grand-nephews. She was predeceased by her brother, Edgar W. “Butch” Francis III. In lieu of flowers, please consider a donation in Pam’s name to the Lower Cape Ambulance Association, PO Box 1721, Provincetown, MA 02657, the Provincetown Rescue Squad, 25 Shank Painter Rd, Provincetown, MA 02657, or the Truro Fire and Rescue Association, PO Box 2013, Truro, MA 02666. Visiting hours are from 4 – 7 pm on Wednesday, September 28th at Nickerson funeral home in Wellfleet. A Mass of Christian Burial will be held on Thursday, September 29th at 10 am at St. Peter the Apostle church in Provincetown. Burial to follow at the Old North Cemetery in North Truro.
VER MÁS VER MENOS