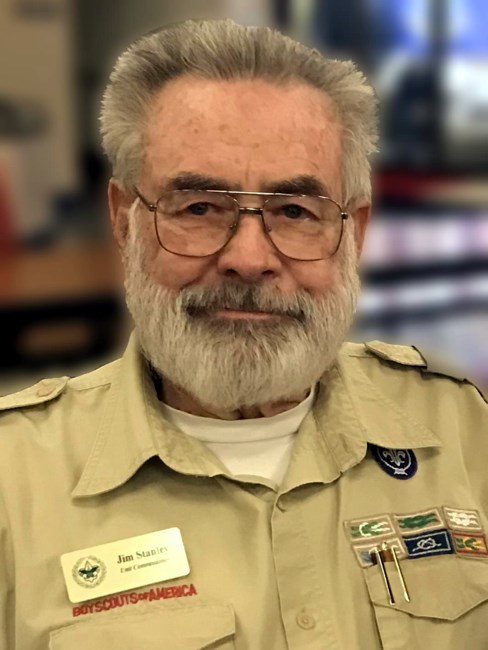 James “Jim”/“Bump” Edwin Stanley, Jr., 83, of Bakersfield, California, passed away on September 21, 2022, having been comforted by family and familiar caretakers at The Palms assisted living facility in Bakersfield. He was born to parents James Edwin “Ed” and Lucile “Cindy” Stanley on April 11, 1939, in Bakersfield. Bumper or Bump, as he was known to family and friends, was a graduate of Bakersfield High School and the University of Hawaii. Bumper served in the US Navy on the USS Long Beach from 1962 to 1966. Bump met Linda Mary Lough in 1965. They were married in June of 1967 in Bakersfield, then promptly moved to Hawaii. They spent the first 10 years of marriage in Hawaii on what they called their “10 year honeymoon” before moving back to Bakersfield once the kids came along. Together they raised two children, Andy and Jenny. Bump had very fond memories of their time in Hawaii, often sharing stories of the friends they had made there and the Hawaiian language with all. Returning to Hawaii on family trips and for their daughter’s wedding were special times sharing a place he loved with people he loved. Bump worked for International Business Machines his entire career as a computer engineer, but his life was truly defined by his love of family, his volunteer work with the Boy Scouts of America, and his talent for woodworking. Among the Stanley family in Bakersfield, Bump had many cousins who he grew up with in the Downtown area. He always enjoyed holidays and other special occasions that brought opportunities to get together and talk with people he loved very much. Summer trips to Huntington Lake with Linda, Andy, Jenny and the rest of the Stanley family were a lifelong tradition and were always special. In Boy Scouts, Jim was a member of Troop 4 in the late 40’s and early 50’s. He served for many years as Scout Master of Troop 147 and as a leader in the Southern Sierra Council. He enjoyed teaching knots to the Scouts, took many Scouts to Camp Kern and helped many earn badges and achieve the rank of Eagle Scout, including his son Andy. Jim was awarded the Silver Beaver Award for his distinguished service in Scouting. Scouting allowed Jim to share his knowledge and passion for the outdoors, where he was a master of campfire cooking using Dutch ovens. More recently, he was proud to see grandson Evan don a scout uniform and was happy to attend a few meetings with him. Bumper was also known for his beautiful woodworking, crafting bowls and boxes that would be gifted to friends and family on special occasions. Bump was preceded in death by his wife Linda Stanley, parents Ed and Cindy Stanley, and his brother Forrest “Beaver.” He is survived by son Andrew Stanley and wife Korrine, daughter Jennifer Sherrell and husband Brian; his grandchildren Claire, Evan, and Emma Stanley; and many cousins, nephews, and nieces. A graveside service is scheduled for Friday, October 14 9:15 am at Bakersfield National Cemetery with a reception to follow. In lieu of flowers please send donations in Jim’s honor to the Boy Scouts of America Southern Sierra Council 2417 M Street Bakersfield, CA 93301.
VOIR PLUS VOIR MOINS