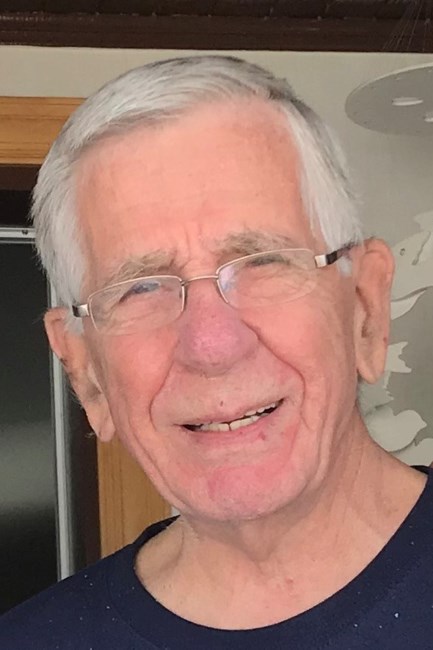 It is with great sadness that the family of George Ellis Flann announce his passing on Thursday, August 19, 2021 at the Campbellton Regional Hospital after two years of failing health. Born in Atholville, NB on July 9, 1933, he was the son of the late William and Isabel (Young) Flann. As a teenager George was an accomplished softball and fastball pitcher and basketball player for the Campbellton Reds. Into his fifties, he was still pitching softball in recreation leagues. He was a Flight Officer in the Royal Canadian Air Force, 349 Squadron and taught Air Cadets during many of his summer vacations. Later in life, he spent most of the winter months curling and his summers gardening, fishing or with family and friends on the Restigouche River in the canoe he helped build. He also enjoyed harness racing and spent many hours over the years “at the barn” when Campbellton had a racetrack or in Fredericton. He had a passion for sports and watched just about any sport on TV and was a Chicago Blackhawks and St. Louis Cardinals fan. He was a lifelong employee of Fraser Papers, retiring at 58 as a Mill Superintendent and then took up wood turning to keep him busy during the winter. He did beautiful work with a very smooth fine finish. There was no shortage of people wanting his bird’s-eye maple bowls and they can be found all over the world. All whom loved him dearly will never forget his outgoing personality and the fun he had playing little jokes, teasing or sneaking up behind you, as he always enjoyed a good laugh. And a good game of cards…there were many evenings spent playing cribbage, Auction 45s or 500s with family and friends. Geordie will be lovingly remembered by his wife of 67 years, Eleanor and his children, Wayne (Julianne) from Whistler, BC, Brenda Monk (John) from Liverpool, NY, and Cindy from Fredericton, NB. He will also be fondly remembered by his six grandchildren, Evan, Rhiannon, Cody, Shira, Trevor, and Ryan, sister-in-law Joan Flann, his nieces and nephews, and other beloved friends and relatives. He was predeceased by his brother William (Billy) Jr. and his six sister-in-laws. There will be no visitation. A private graveside service will be held at the Campbellton Rural Cemetery at a later date. The family would like to thank the nurses from Extra Mural for their care over the last couple of years and all the medical staff of the various units at the Campbellton Regional Hospital. For those who wish, remembrances may be made to the NB Kidney Foundation or the Alzheimer Society or a charity of the donor’s choice. Funeral arrangements are in the care of Maher’s Funeral Home, Campbellton. (506) 789-1699 or toll free (855) 404-1699 email: maher.fh@nb.aibn.com
VOIR PLUS VOIR MOINS