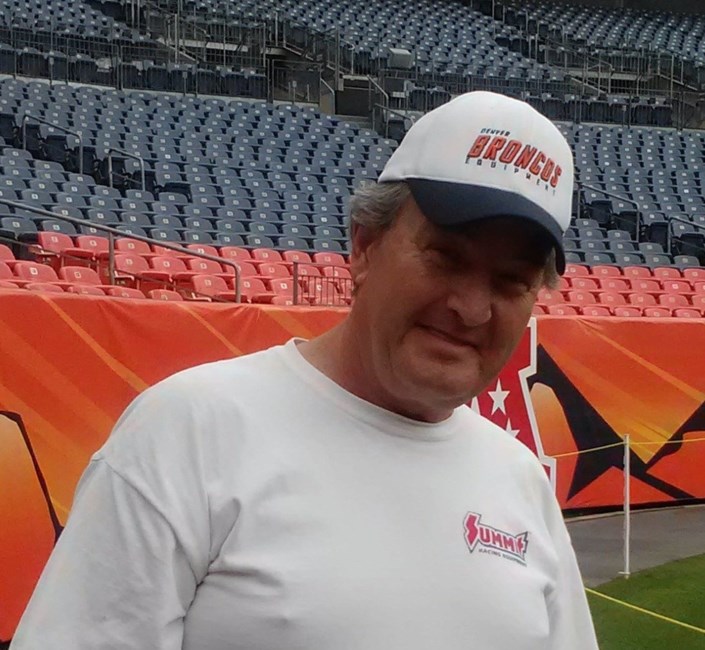 Timothy Eugene Roos died at his home in Longmont, Colorado, on Sunday, August 2, 2020, with his daughter Tyra and brother Steve by his side. Tim was diagnosed with colon cancer in August of 2019. After enduring 6 months of chemotherapy, unfortunately the cancer returned and spread quickly. He fought long and hard and he never did give up hope. Tim was 61 years old. Timothy Eugene Roos was born two months premature on October 19, 1958, to Anna Ruth (McCarter) and Edward Eugene Roos at the Santa Fe Hospital in La Junta, Colorado. He endured many struggles as an infant but as his Mom always said, he was a fighter. He was raised in La Junta, Colorado, with his brother Steve and sisters Debbie and Michele. When he was a young boy, he participated in 4-H and Boy Scouts. He also played baseball in the youth league in La Junta for several years. As a child he was a free spirit, adventurous, ornery and, at times, mischievous. Through his teen years he participated in many sports including football and wrestling. He always loved hot rods and drag racing. He would take his little sister Michele along to drag race and then bribe her with candy not to tell Mom. He was a popular young man and had many friends in his hometown. Two of his very best friends were Will and Mike Franklin, who he considered as brothers. He proudly graduated from La Junta Jr/Sr High School in 1977. Tim was an honorable man. He was gentle, honest, and full of integrity. He was a very generous person, who would help anyone in need however he could. He was compassionate and thoughtful, kind to everyone he met. Tim was very witty and had a great sense of humor. He was also known for his ornery grin and his bright smile. He believed that in life you work hard and play hard. It was important to him to enjoy life, live for the moment and loved providing the same opportunity for those he loved. Tim married Becky (Busby) Roos on September 13, 1980, in Burlington Colorado. They had only one child, a daughter, Tyra Rene, on September 19, 1983. Tyra was daddy’s little girl. They had an unspeakable bond. He was dedicated to and took great pride in providing for his family. He worked hard his whole life. When he was a young man, he worked on feedlots and did farm work. He drove truck for a short time. For more than 30 years he has been a heavy equipment operator. He truly loved operating his bulldozer and took great pride in his work. He had mastered the craft of excavation and dirt work. He was known to be one of the greatest last old school operators around. For the last 8 years he was proud to work for a family owned company, Duran Excavating of Greeley, Colorado. He was also proud of assisting in the restoration efforts in Jamestown, Colorado, after the floods in 2013 and of being a part of building the new CSU stadium this past year. Tim had many hobbies. He enjoyed collecting everything from antiques and sports memorabilia to guns, toys, and music memorabilia. He loved fishing, hunting, going to the drag races, gardening, and working on his classic car, a 1967 RS Camaro. He purchased the Camaro in April of 1993 and spent the last 27 years meticulously restoring it on his own. He was very proud of that car. He loved all hot rods and like everything else he did, he mastered the craft of working on them. Tim also enjoyed going to Broncos games with his brother Steve for many years. He loved spending time with his brother Steve. Steve and Tim were the best of friends. From their childhood into their adult lives they were inseparable. They did everything together, including work. Being 18 months apart in age they had the bond of twins. Steve and Tim were always looking out for one another. His favorite pastime was spending time with his daughter Tyra, her husband Josh and his grandchildren Wyatt and Marshall. They spent every Sunday together going to eat, fishing, attending fun events the kids enjoyed and shopping for the boys. It brought him so much joy to spoil his grandkids. He loved teaching them about life and telling stories about his. Watching those little boys just be little boys brought him so much joy. Tim also thought the world of all of his nieces and nephews, treating them as if they were his own children. Timothy was preceded in death by his father Edward Eugene Roos, his sister Lisa Gaye Roos, and special kitty Spanky. He was survived in death by his daughter Tyra Pritt and her husband Josh Pritt, grandchildren Wyatt Pritt and Marshall Pritt, wife Becky (Busby) Roos, mother Anna Ruth (McCarter) Andrews, brother Stephen Roos, sister Debra (Roos) Foulk, nephew Jason Foulk (Ashley), niece Ashley Castanik (Craig) great nephew Dimitri Castanik and great niece Alyssa Castanik , sister Michele Roos-Gautreaux (Jeremy), nephew Taylor Wolf and nieces Avery Wolf, Eleni Wolf, and Tilley Roos, and special kitty Zeke. The family will be having a private memorial service in honor of Tim at an undetermined future date and time. Throughout Tim’s illness it just broke his heart to think that children had to experience what he was going through. In lieu of flowers, the family requests that donations be made to St. Jude Children’s Research Hospital in Tim’s memory to help end childhood cancer.
VOIR PLUS VOIR MOINS