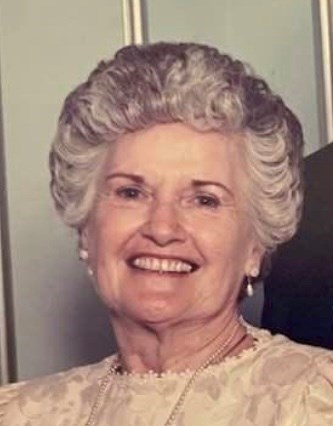 Lorraine L. "Lala" Davis (nee' Mathis), fortified with the Sacraments of Holy Mother Church, passed away on Thursday, February 17, 2022 at the age of 96, although Lorraine would tell you she was 96 1/2 or in her 97th year. Lala was the beloved wife of the late William J. Davis; loving mother of John "Jack" (Diana) Davis, Robert "Bob" (Brenda) Davis, Donald "Don" (Annette) Davis, James "Jim" Davis, Ann Davis of Bradenton, FL, and Barbara "Barb" (Mark) Reinholz, and the late infant Mary Davis; cherished grandmother of 14, great-grandmother of 16; dear aunt, great-aunt, and a friend to so many in her lifetime. She was preceded in death by her parents, Joseph and Anna (nee Mich) Mathis, her siblings Josephine (Paul) Sutter, Bertha (Tony Freitag and Robert Suntrup) Suntrup, Ann (Ed) Gerau, Leo (Mitzi) Mathis, and Rene Mathis. Lala was born in Saint Louis on October 21, 1925. She attended Epiphany of Our Lord Catholic School and Southwest High School. Lala and her future husband, Bill, knew each other from the Epiphany neighborhood. They were married on September 3, 1945 (Labor Day). Together they raised their six children in St. Dominic Savio Parish in Affton. Lala enjoyed being a homemaker, gardening, and cooking. She made sure the birds in her backyard were well-fed. Her angel food cake was a specialty that family requested for birthdays. Lala liked a glass of wine with her meals. Most of all, she loved spending time with her family, and she adored her grandchildren and great-grandchildren. Lala was a faithful Catholic and was devoted to the Blessed Mother. She prayed the Rosary every day. Visitation will be Monday, February 21 from 4-8pm at Hoffmeister Colonial Mortuary, 6464 Chippewa Street 63109. Mass of Christian Burial will be celebrated on Tuesday, February 22 at 10am, at Saint Dominic Savio Chapel, 7488 Mackenzie Road, Affton 63123. Interment Sunset Memorial Park. In lieu of flowers, contributions in Lorraine's memory to the St. Vincent de Paul SDS Conference, Cardinal Ritter Senior Services, a charity of one's choice or Masses said would be greatly appreciated by her family. Please leave a favorite memory of Lorraine for her family to cherish at the "Add a Memory" link below.
VOIR PLUS VOIR MOINS