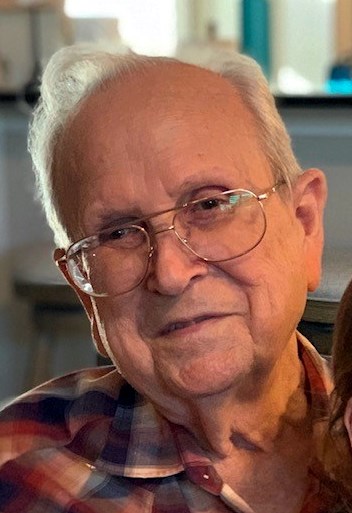 Fred was born on June 8, 1932, in Vilonia, Arkansas to Janette Pearl and James Fred Gunter, Sr. He graduated from North Little Rock HS where he had met the love of his life, Patsy May, and they were married on February 2, 1951. He worked as a boilermaker’s apprentice for Missouri Pacific Railroad in N. Little Rock until landing a job with Texas Eastern Gas Pipeline Corporation, and moved to Texas in 1955. He and Pat settled into Goliad County's Texas Eastern Charco station where he worked as one of five plant operators, raising their two children who attended Goliad ISD. They moved to Goliad in 1981, but Fred continued to work at Charco station until reaching a total of 39 years with the company. He retired in 1992 to spend time traveling around the country with Pat in their 5th-wheel RV with a caravan of friends - the highlight of which was a trip to Alaska.

Fred served in the U.S. Naval Reserve from 1949 to 1961 and also was an honorable, member of the Goliad Masonic Lodge #94 A.F. & A. M. He and Pat were devoted Christians and active members of the Goliad First United Methodist Church, where their strongest and most endearing friendships were forged. Over the years, they also served many roles in Goliad's community, including EMS volunteers and helping build the downtown community playground. Fred passionately loved fishing and hunting, and would "indulge" whenever he could. He also was an all-around do-it yourselfer, including garage mechanic, and woodworker. He and Pat reluctantly sold their RV and home, and moved to Temple in 2012 to be closer to their daughter, as Pat’s dementia progressed. They attended Oak Park Methodist Church in Temple when they could.

Fred is survived by his children James F. “Taj” Gunter III (Surgee) of Kea’au, Hawaii and Tammye Baecker (Marty) of Rogers TX; grandchildren Britney Rand (Mark) of Cypress TX; Ben Baecker (Lizzie) of Temple TX; and great-grandchildren Morgan and Rett Rand; and brother-in-law Derol (Ann) May of Lebanon OH, along with multiple nieces and nephews whom he adored. Fred also lovingly leaves behind two step- grandchildren: Denni Jordan and Danny Morgan, along with their families, in Pueblo, CO. Fred will be remembered most for his unwavering love for his sweetheart/wife and his faith in his Lord and Savior, Jesus Christ. Fred's generosity and "ever-readiness" to lend a helping hand whenever and wherever he could was a hallmark of his character. His brotherly love and light-hearted nature that impacted the lives of all who were graced by his presence will be sorely missed. Fred firmly believed that it is better to give than receive and thus fulfilled that belief as a life-long cheerful giver.

Funeral services will be held at Goliad First United Methodist church on Tuesday, November 30, 2021 at 2:00 P.M. Visitation with family will precede the service at 1:00 P.M.

In lieu of flowers, donations are encouraged to the Goliad First United Methodist Church, the Methodist Children’s Home, your local hospice care, or charity of choice. A special, heart-felt thanks to the staff at Brookdale Western Hills, Scott and White Hospice, and the Meridian, all of Temple, for their loving care and services rendered for Fred.