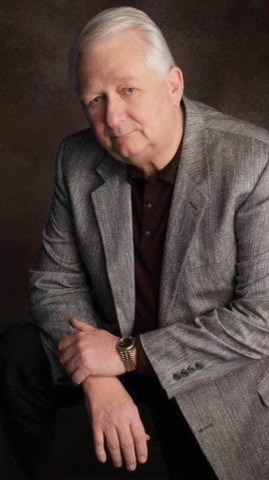 Ernie Dempse Pyle passed peacefully at the age of 77. Ernie was born on July 13, 1944 in El Paso Texas. A tall, skinny boy who loved to play basketball in his driveway but was also extremely musical. He frequently played the piano and organ at church. During these years he often used such skills to gain attention from the girls. He was known to be the “fun guy” to date and in general to just be around, often going broke entertaining the ladies and his friends. He went to high school in Keene, Texas then continued his education at Union College in Lincoln Nebraska. He ended up back at Southwestern Adventist University in Keene where he obtained a degree in Theology….eventually. He loved learning and decided college life was fun so he spent a few more years there perfecting college life. After graduating he worked in the ministry in various places but ultimately started working in sales. He quickly discovered that he was very good at it. So much so that his next true calling was being a sales trainer. He worked in the security system business for over 30 years training sales staff and opening branch offices across the country. However he never stopped his commitment to ministry and taught Sabbath school classes, held Bible study groups at home and served in various other roles within the church. Upon retirement, he and his beloved Sue shed most of their worldly possessions to move into a small garage apartment at their daughter’s home so they could be free to roam. They traveled the country visiting historical places, friends, attending concerts, and just spending quality time together on these long road trips. When at home, he loved being the “Cattle Baron”, watching over his herd of Longhorns that he and his son-in-law started collecting. He continued to spread the love of God through Knowing God Ministries that he and Rob Sheppard founded. They conducted seminars in churches all over the country on the Names of God. A message they were both very passionate about. After the death of his wife, he busied himself by having daily lunches and dinners with his brother Chatt, Charles, Rob, Ion, Andy, Shirley, Terry & Katherine….the list is too long to continue. He and Rob wrote a book (or 2), published it and frequently attended churches to discuss it’s subject matter and, of course, sign them. He reconnected and took a few trips with his brother and cousin, Cindy, where they reminisced about their childhood and swapped life stories. But mostly, friends came to visit from all over the US to spend a couple days with their dear friend. He cherished those friendships that he had cultivated for 30, 40, and even 50 + years. But his family was the center of his universe, he gained 3 kids with his marriage to Sue and no one would ever know the word “step”. He loved his kids, supported them and adored his grandchildren and great-grandchildren as the family continued to grow. He loved his role as “Grandpa” more than any other role throughout his life. He was great at it and he was not ashamed to shamelessly brag on his grandkids to anyone who would listen. Ernie was preceded in death by his father Reuben Temple Pyle, mother Ruth Christine Terry and his true love, his soulmate, his wife, Roberta “Sue” Pyle. He is survived by his brother Chatt Pyle and cousin Cindy Perkins. His son, Clayton Calvert and his wife Francine; son Kelley Calvert and his wife Lori; daughter Dani Carr and her husband Chad; His 11 grandchildren and 15 great grandchildren. As well as numerous friends and fellow followers of Christ. To view the service virtually, please follow this link: https://live.arlingtonadventist.com/.
See more See Less

In Memory Of Ernie Dempse Pyle