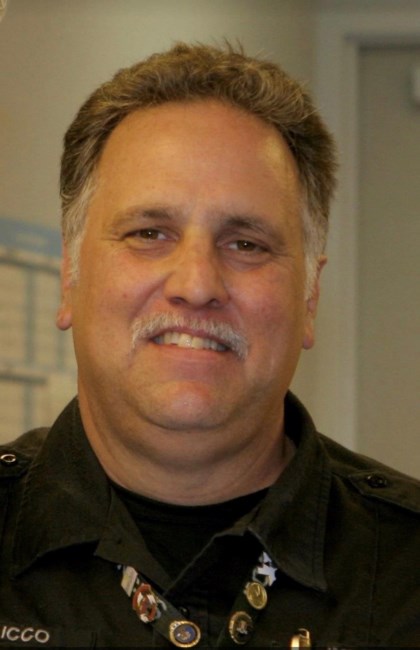 Peter “Pete” Joseph Salicco age 61, passed away on August 17th, 2020 in Bridgeport, West Virginia. He was born on April 10th, 1959 in Dallas, Texas to Joseph Salicco and Betty Lou (Everett) Salicco. Pete graduated from Sequoyah High School in Doraville, Georgia before moving back to Texas to study music at the University of North Texas in Denton. Pete met and fell in love with his wife, Phyllis (Zimmer) Salicco, while attending UNT. They married on May 19th, 1979 and remained married until Phyllis’s death in December 2000. They had 2 children, Erin and Ben. In 1985, Pete began his long career in law enforcement, first as a police officer with the Amarillo Police Department, then later transitioning to become a Certified Latent Print Examiner/Certified Crime Scene Analyst. Pete began working as a Senior Latent Print Examiner for a company in West Virginia in 2018. Pete also started Salicco Fingerprint Brush Co. where he created innovative tools that are used by crime scene investigators across the country and abroad. He was also a member of the Free Masons. Pete married his loving wife Judy (Fowler) Salicco in April 2002 and they shared 18 years together. Pete was a talented musician and shared his love of music with his family and friends. He impacted the lives of everyone he met and was a mentor and friend to many. Pete is survived by his wife, Judy Salicco; his children, Erin (Jerry) Wolfe, Ben (Holly) Salicco, Michael (Beth) Fowler, and Jason (Sarah) Fowler; his grandchildren Sean, Amy, Katie and Evan Wolfe, Zoe Fowler, Sophia and Josiah Salicco, Cody and Rosie Fowler; his father, Joseph Salicco; his siblings, Vickie (Charles) Marino , Terry (Bob) O’Neill, and Robert Salicco. He also leaves behind several in-laws, nieces, nephews, great-nieces, great-nephews, cousins, and lifelong friends. A small service will be held at Abundant Life Church in Grand Prairie, Texas on Tuesday, August 25th at 10:00 am. He will be laid to rest at Moore Memorial Gardens in Arlington, Texas. In lieu of flowers, donations can be made to Texas Division of the International Association for Identification (TDIAI) via the Charles Parker Memorial Scholarship fund at tdiai.wildapricot.org.
See more See Less

In Memory Of Peter Joseph Salicco