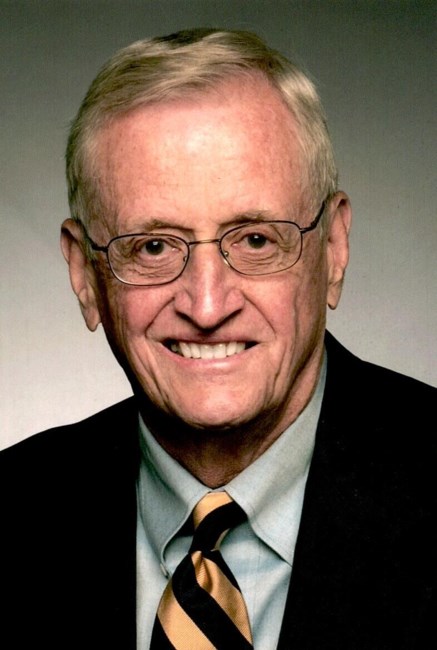 Robert Coe Bohlmann was born on August 9, 1929, died January 20,2023. Preceded in death by his parents Romaine Hayward Coe and John Robert Bohlmann of Canandaigua, NY. The family relocated to Niagara Falls, where he attended La Salle High School, graduating in 1947. He attended Bethany College in West Virginia, transferring after two years to Syracuse University. He was very active in Beta Theta Pi. Bob joined the Air Force in 1950, serving 44 months, with two years in Japan as a Staff Sergeant. As a leader, he was responsible for a 23 man base defense team and was also responsible for the local procurement for a section of the base. Upon completion of his service in the Air Force , Bob returned to Dallas and graduated from Southern Methodist University. Bob began his career with Vick Chemical in Philadelphia, New York, and Mexico City. In 1960, Bob was recruited by Dental Medical Economics in Dallas. In 1963, he had the good fortune to be introduced to a West Virginia girl, Sandy Foster, his wife of 59 years. In the mid sixties, he initiated his own small consulting firm to work with physicians in their group practice. Bob became a member of Medical Group Management Association of Denver. Bob was a very active member and later was elected National President. In 1988, Bob consolidated his personal consulting business with MGMA. During his career, he was engaged by medical groups and health systems in 48 states, and 5 South American countries. Bob also published over 100 articles, and in 2000 Bob was honored with an MGMA Lifetime Achievement Award. At home in Arlington, he also worked with Family Health Care Associates as an employee and as a consultant. Throughout his life, Bob was active in sailing, fly fishing, and backpacking in Colorado and Montana. His love of the mountains inspired him to have a part time residence in Steamboat Springs, Co and then later relocating to Pagosa Springs, Co. He enjoyed spending time with his children and grandchildren and listening to jazz and dance bands such as Ellington, Dorsey, and Miller. Bob and Sandy have been long time participants in Arlington Memorial Fitness Center enjoying social contacts with other members, as well as keeping physically fit. He is survived by his wife Sandra; their children Rob Bohlmann (Caroline) of Steamboat Springs, Co and Heidi Miles (Dan) of Santa Ana, Ca; their 6 grandchildren Gabriel, Natalie, and Murphy Bohlmann and Nicholas, Christopher, and Mallory Miles. Following a private cemetery service on February 4th at Moore Memorial Gardens, a memorial service will be held at First Presbyterian Church Arlington, 1200 S Collins, Arlington 76010 at 3:30pm. A Celebration of Life will follow at Moni's Pasta & Pizza, 1730 W Randol Mill Rd, Arlington. The family requests that donations be sent in lieu of flowers to First Presbyterian Church Arlington 1200 S Collins, Arlington, Tx 76010 or by visiting firstprestexas.org.
See more See Less

In Memory Of Robert Coe Bohlmann

Send flowers in the next 8 hours for guaranteed delivery.