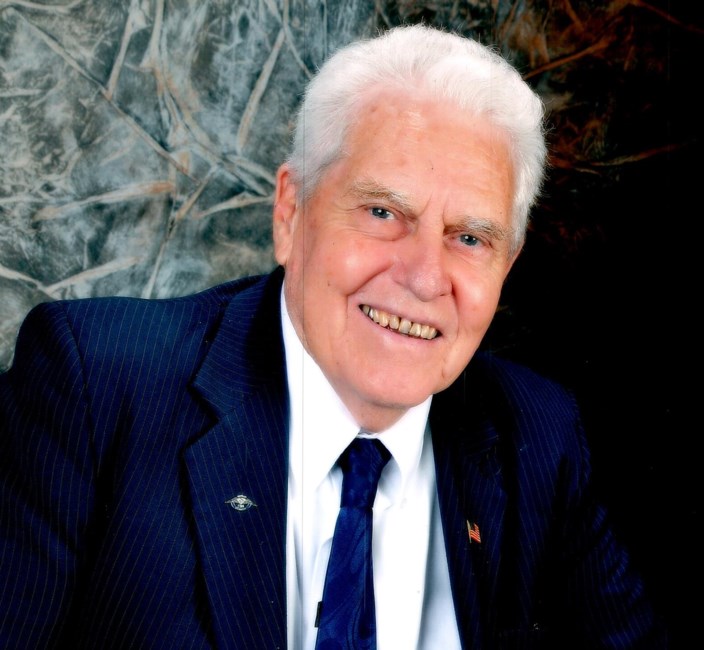 On January 15, 2023, Robert Frank Hughes, loving husband and father, was called home to be with his Lord and Savior, Jesus Christ, at the age of 93. Robert, “Bob,” was born in Long Beach, California on July 16, 1929, to Laura Laverne McBride and later adopted by George Elmer Hughes. Bob grew up in Long Beach where he graduated from Polytechnic High School and enlisted in the United States Navy. After graduation he immediately reported to service at Los Alamitos Naval Air Station. He worked in cryptology and intelligence, entrusted with top secret matters. During his early years in the Navy, he met and married his true love, Dorothy Marie Robinson. They were married on February 2, 1951 and would have celebrated their 72nd anniversary in a few weeks. They were blessed with a son, Richard Alan and daughter, Monica Lynne. Bob was stationed at Naval Air Stations in Grosse Ile, Michigan and Dallas, Texas where he retired with the rank of Senior Chief Radioman in November of 1967, serving his country for 20 years and 7 months. After retiring from the Navy Bob worked for Norman Rockwell Associates and then Docutel as a technical publications writer. He retired a second time in 1991. Since his first solo flight at the age of 16 he dreamed of being a Navy pilot although life had other plans. Retirement gifted him the freedom to pursue his true passion full-time – flying. Bob, along with a former Navy buddy, formed a flying school and spent many years enjoying everything regarding planes and flying. Dottie and their son, Richard, earned their own private pilot licenses under his expert guidance. He was a licensed A&P Mechanic and Inspector who was extremely vigilant in the care of many of his buddies’ planes. Being a member of Angel Flight, Inc., an organization dedicated to flying cancer patients to and from their homes to care facilities across the country, brought him much satisfaction. Bob was a member of the UFO Club, the United Flying Octogenarians, and kept flying into his 91st year. Other hobbies he enjoyed throughout his life were roller skating, Ham radio operations, and boating. He served as a volunteer at Texas Health Arlington Memorial Hospital in the cardiac rehab department for more than 10 years. In addition to his love of all things flying, Bob loved God and was faithful to Him his whole life. In 1970 he and his family were founding members of Arlington Christian Church now known as Crossroads Christian Church. Serving as a class teacher, deacon, and elder, he was a valued member for over 50 years. He loved seeing the youth participating in all their programs as well as so many believers being baptized. Among his last wishes was to “make sure to keep the church going.” Bob deeply loved his wife and family, especially his great-grandchildren. It was extremely important to him that they know he loved them so much and was immensely proud of them all. He was a man of honor who kept his word and valued hard work, but he also loved to laugh. Bob was preceded in death by his parents, George and Laverne Hughes, brother, William Hughes, and grandson, Richard Alan Hughes, Jr. He is survived by his wife, Dorothy; son, Richard and his wife Rosemary; daughter Monica Derr and her husband David; sister Sharon Head and her husband Rod; granddaughter Regan Andrews and her husband D.C.; granddaughter Robyn Hughes; grandson Travis Derr; granddaughter Danielle Ross and her husband Daniel; grandson John Derr and his wife Karen; great-grandsons Cullen, Wesley, and Declan Andrews; and great-granddaughters Charlotte Ross and Hannah Derr, along with nieces and nephews. Visitation will be held at Moore Funeral Home in Arlington, Texas on Wednesday, January 25, from 6-8 p.m. with funeral services to be held at Crossroads Christian Church in Grand Prairie on Thursday, January 26, at 10:30 a.m. There will be a private burial with full military honors at Dallas-Fort Worth National Cemetery following the service. Pall bearers are grandsons Travis and John Derr, grandsons-in-law D.C. Andrews and Daniel Ross, and long-time friends Harold Barnthson and Robert Frenzel. United States Navy Captain Adam Klein will present the flag to the family. In lieu of flowers, please consider a donation to the Joash Fund at Crossroads Christian Church, 6450 TX-360, Grand Prairie, Texas 75052.
See more See Less

In Memory Of Robert Frank Hughes