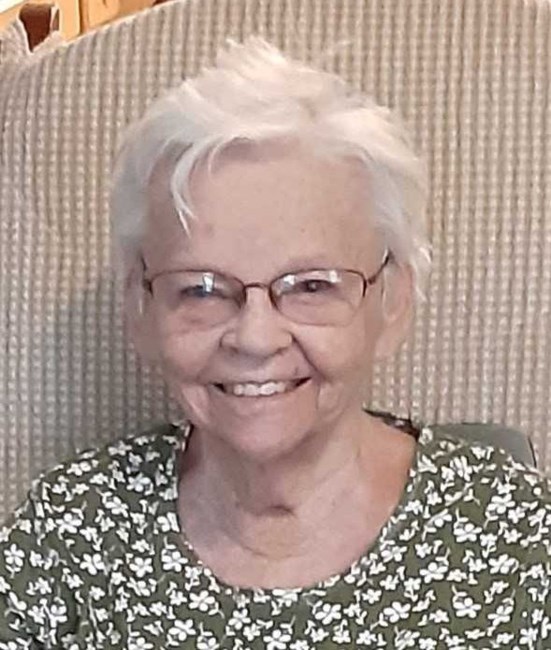 Claudette I. Caron 1934-2022 Auburn - Claudette Isabelle Caron passed away on Sunday, September 18, 2022. Claudette was born in Lewiston on July 18, 1934, the daughter of William Meservier and Marie Louise (Langelier) Meservier. Growing up on Locust Street, she was the fifth daughter of six with two brothers. Since she was several years apart from her older sisters and her younger brother, she was deemed The Princess. She took the title to heart and ruled with benevolence and compassion. One of her younger brothers, Nel, had the duty of running home from school to get her King Cole potato chips and a Pepsi for lunch. She did share with her young nephew, Dan, who had to sit on her lap if he were to get any chips. Claudette attended area schools and graduated from Lewiston High School in 1954 and described in her yearbook as “Petite and gay”. She loved to dance at the Lewiston City Hall and met Noel Caron whom she married on September 24, 1955. Together they raised six children on Lincoln Terrace in a house right next to her parents.’ The house was not a palace befitting a princess, but it was filled with music, love, and noise. In 1969, Claudette took a big step in returning to the workforce to help out in supporting six children. She worked at St. Mary’s Hospital in the kitchen where she met people who would become lifelong friends. She was also Mom C. or Mrs. C. to countless young workers who became her second set of children. To this day many of them still send Christmas cards and birth announcements as they remembered Claudette as a kind and gentle person. Claudette later worked in housekeeping, patient transport and finally at the front desk. Although she was shy she did a wonderful job in greeting the people who walked into the building. She became the face of the hospital and mentioned in newspaper articles and awards. She came from a musical family and shared her talents in playing the piano, singing and sometimes acting. But she found the most joy in attending performances by her brothers, in-laws and children. She followed her brothers Nel and Mickey ,brother-in-law Ray Chouinard and nephew Jerry Meservier in the C’est Ci Bon Band. She loved musicals and attended as many as she could whether it was on Broadway, Ogunquit, Maine State Music Theatre and especially Community Little Theatre. She often had to meet the actors and musicians after a show for her approval. It was expected that the actors and musicians meet her after the show. She was a devout Catholic having been baptized, confirmed and married at St. Mary’s Church in Little Canada. She served as secretary on the St. Mary’s School Board, was a member of Les Dames de Sainte Anne, and sang in the choir. She later became a parishioner at Prince of Peace attending the eleven o’clock mass every Sunday in her special pew next to her church friend, Irene Bourque. She prayed to many saints especially St. Anthony who had a knack of helping her find lost things around the house. Claudette was a lifetime learner attending evening classes and Senior College. She was a voracious reader interested in many different genres. She quilted with her cousin Dorothy Cadrin, crocheted, and sewed. She loved tending to her flowers, especially her favorite hydrangeas. She enjoyed drives with daughter Joline and ate at every restaurant in town with her sisters and brothers at least once every week. To stay sharp, she solved word games in paper and pencil or on her Kindle. The Princess said she was shy and had to be coaxed to attend social functions. But once she got there, she was the center of attraction. This was due to her gentle manner, her engaging smile, and her subtle teasing style. She will be missed by many people. Claudette is survived by her two daughters, Monique Grenier and husband Rick, and Joline Caron. Her sons, Paul Caron and wife Susan, Roger Caron and wife Debbie, Robert Caron and wife Tammy, and Dana Caron and wife Michelle. Her grandchildren, Jonathan Caron, Kathleen Grenier, Amanda Grenier, Elisabeth Caron, Crystal Caron, Rebecca Caron, Brittany Caron, Jessica Caron, Jada Caron, Elliot Caron, Heather Fisher and husband Brandon, Hailey Caron, Aleya Caron, and Maxwell Caron and five great-grandchildren. Her sister Jeannine St. Pierre and Husband Claude, brother Lionel Meservier and wife Janine, sisters-in-law, Diane Meservier and Fernande Cyr. Several nieces and nephews and lifetime friends, Bob Allen, Myrna Demers, Verna Lasko and Flo Bilodeau. She was pre-deceased by her husband Noel in 2003, her sisters Loretta Arsenault, Theresa Beaulieu, Lucienne Giasson, Rita Bazinet and her brother Armand (Mickey) Meservier. Claudette’s family would like to thank all of the doctors, especially Dr. Maria Ikossi, the nurses and aides who took care of her at St. Mary’s Regional Medical Center and at the Androscoggin Home Health Hospice. It is time for you to rest Claudette and in the words that you sang to your children at night, Dodo, l'enfant do L'enfant dormira bien vite Dodo, l'enfant do L'enfant dormira bientôt Dodo, l'enfant do L'enfant dormira bien vite Dodo, l'enfant do L'enfant dormira bientôt. To leave a message for the family in their online guestbook, please visit www.thefortingroupauburn.com Visitation The Fortin Group / AUBURN Friday Sept. 23rd from 6 - 9 PM. Funeral Mass Holy Family Church Sat. 11 AM. Committal Prayers St. Peter's Cemetery. Those wishing may make donations in her memory to The Hospice House, 236 Stetson Rd. Auburn, ME 04210. Arrangements are under the care and direction of The Fortin Group Funeral Home and Cremation Service, 217 Turner Street, Auburn, ME 04210 207-783-8545
See more See Less

In Memory Of Claudette Isabelle Caron