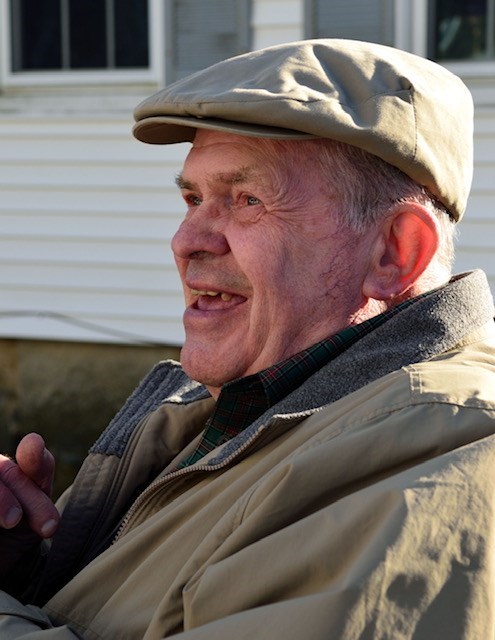 Jean Paul (John) Labonte of Lewiston, passed away on August 1, 2022, in the tranquility of his home, as a result of complications from lung cancer. He is now reunited with his beloved wife, Eva, who died in April of 2009. He was born in Lewiston, February 2, 1935, son of Charles H. Labonte and Regina Beaumont Labonte. He attended Lewiston schools and graduated from St. Dominic High School in 1952. He served in the U.S. Air Force for four years in upstate New York, French Morocco Africa and in California. On May 3, 1958, he married Eva A. Castonguay at St. Rose of Lima Church in Chisholm, Maine. Over their married years they were blessed with five children, Mark, Pauline, Joline, Anne, and Andre and Sixteen grandchildren (thirteen boys and three girls), and five great-grandchildren. He worked for Lewiston Supply Company in his earlier years before and after returning from military service. He then was employed by The Prudential Insurance Company and served in various capacities over his thirty year career. He was an agent for two years in Lewiston; an assistant manager for four years in Farmington and Portland; a training consultant for two years in Toronto; a district manager for seventeen in Quebec City, Lewiston and Portland Maine and finally, as a Vice President of Marketing in Montreal for five years. He and his wife enjoyed traveling during his working years as well as visiting religious shrines in Europe after retirement. He also enjoyed woodworking and puttering around on their various properties as they moved from place to place over his insurance career. He also was a volunteer worker at the Prince of Peace Parish Library which was dedicated to the memory of his wife in November of 2009. He and his wife were members of St. Joseph Parish and also attended services at St. Patrick’s Church for the few years prior to both Churches being closed in 2009. He is survived by his son, Mark and wife Lisa-Marie of Lewiston and their four children, Justin, Matthew, Christian and Gabriel; His daughter, Pauline Labonte of Lewiston and son Gregory; His daughter, Joline and husband Dr. Eric Lindsley of Bath and their three children, Cameron, Tessa and Spencer; His daughter Anne and husband Dr. Joseph Dramko of Bismarck, North Dakota and their two children, Luke and Evan; His son Andre and wife Jennifer of Mechanicville, New York and their six children, Chandra, Benjamin, Kolbe, Natalie, Nathan , and Kyle. He is also survived by his sister, Stella Murphy of Lewiston. He was predeceased by his beloved wife of fifty-one years, Eva, in 2009; his daughter-in-law, Janice Dent Labonte who died in an automobile accident in 1999; his father, Charles in 1960; his mother, Regina in 1988; his mother-in-law, Eva M. L’Italien Castonguay in 1959; his father-in-law, Charles H. Castonguay in 1973; his brother-in-law, Robert Murphy in 2008. A visitation will be held Friday August 5th, from 6-8PM at The Fortin Group Auburn, 217 Turner St. a mass of Christian burial will be celebrated Saturday August 6th at 10AM in the upper church of Ss. Peter and Paul Basilica a committal to follow at St. Peters Cemetery. In lieu of flowers, donations may be made to St. Mary’s Food Pantry, St. Martin de Porres Residence or St. Catherine of Siena Residence.
See more See Less

In Memory Of Jean Paul Labonte