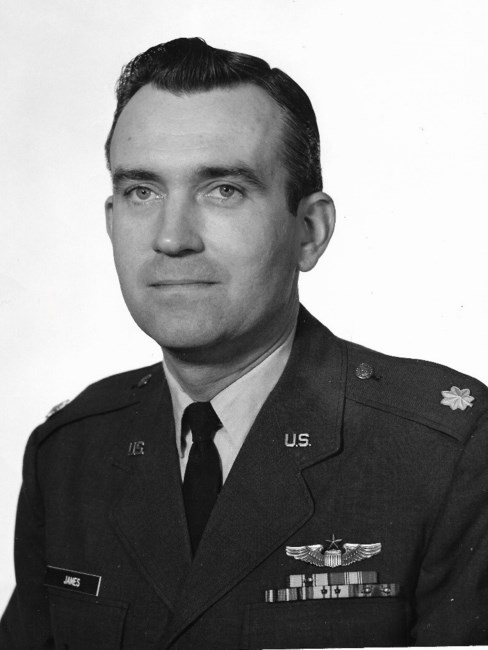 Surrounded by family, Raymond Francis Xavier James, Jr. (88) entered heaven on Sunday, April 11, 2021. There will be a Rosary Vigil Service from 6 to 8 p.m. Thursday, April 22, 2021 at 6100 N. Lamar Blvd. and a Mass in celebration of Raymond James’ life will take place at 10:00 a.m. Friday, April 23, 2021 at St. Theresa Catholic Church in Austin with Bishop Vasquez of the Diocese of Austin officiating with a reception to follow. One of God’s best will then be laid to rest with full Military Honors at Fort Sam Houston National Cemetery on May 11th at 2:30p.m. Arrangements are under the direction of Cook-Walden Funeral Homes. Ray was born on September 30, 1932 in New York City. Growing up he spent summers on the family farm in Pennsylvania but he was educated in the city, graduating from Fordham Preparatory School in New York City in 1950. He went on to earn a Bachelor of Science degree in Pharmacy from Fordham University in 1954 and in December 1975 he received his MBA from California State University. A hard worker since childhood, he worked two jobs while in college in addition to joining the Air Force ROTC program in January 1951. He completed his Air Force training and was commissioned a 2nd Lieutenant in July 1954. On October 9th, 1954 he married Barbara Siska, a young lady from his New York neighborhood whose father had been his Boy Scout Leader. They started their married life in the city before Ray was called to active-duty in San Antonio on March 12, 1955. After being reassigned for pilot training, he earned his pilot wings in Florida on April 27, 1956. A career in the Air Force suited Ray. A Vietnam veteran, he retired after more than 20 years of distinguished service as a Lieutenant Colonel and Deputy Base Commander of Los Angeles Air Force Station (LAAFS) on November 30, 1977. Ray earned numerous decorations and awards during his years of military service some of which include the Distinguished Flying Cross, the Meritorious Service Medal, the Air Medal with Seven Oak Clusters, and the Air Force Commendation Medal with Three Oak Leaf Clusters, among many others. After retirement from the Air Force and a move to Austin he reentered the workforce as Director of Parking and Traffic at The University of Texas at Austin working 15 years for the University before retiring a second time in the early 90’s. His next career was one of faith. In 1988 he was ordained a Deacon in the Catholic Church and was invited to join the Knights of Columbus. He “retired” after 27 years of service at St. Theresa’s Catholic Church in 2015 for a third and final time to enjoy a well-deserved rest. Ray was preceded in death by his parents; Raymond F.X., Senior and Grace James; daughter Christy; brothers William and Robert James, and a sister, Florence Marie “Tossie” Scavo. He is survived by Barbara, his devoted wife of over 66 years; his children Gina Marie and her husband Kenneth Morris of Amarillo, TX, Vicky and her husband Marc DeRosa of Mesa, AZ, Lorrie and her husband Rob Wolf of Corona, CA, Ginger James and her husband James Barron of Hilton Head Island, SC, Celeste and her husband Rob Robinson of Austin, TX, and Ray (III) and his wife Heather James of Cedar Park, TX. In addition, he is survived by 11 grandchildren, Stephen, Shauna, Michelle, Sarah, Audrey, Laura, Mariah-Rose, Hadley, Ryan, Morgan, Reese, a great grandson, William plus nieces, nephews, and extended family far too numerous to list. In lieu of flowers, the family requests donations be made to the St. Vincent De Paul Society and memories shared at the Cook-Walden Dignity Memorial website (https://www.dignitymemorial.com/obituaries/austin-tx/raymond-james-10149672). To access the autobiography of Raymond F. X. James, Jr., please visit bit.ly/raymondjamesjr
See more See Less