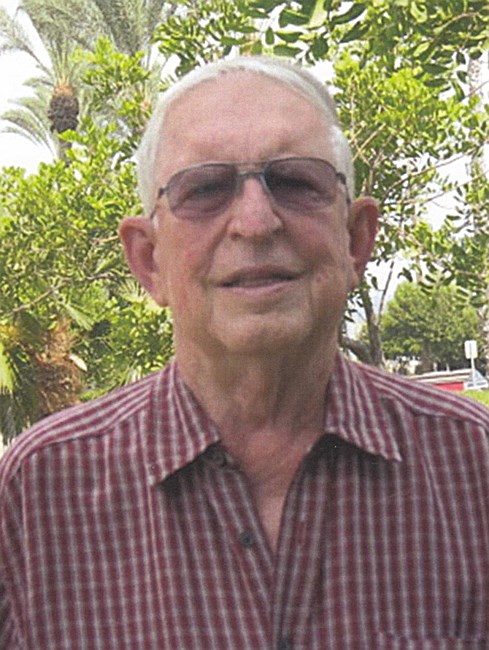 Dennis was born and raised in Kansas City, MO. On July 29, 1937. Dennis served in the United States Army from February 8, 1959 to December 11, 1964. He received his accounting degree from Central Missouri University. On September 12, 1959 he married Catherine Mueller. They had three children: Jan (Darvin), Dennis and Jefferey (Vicki). They ar also blessed with 5 grandchildren: Jason (Pam), Kaycee (Joey), Lucas (Cyan), Amanda and Jake. And 2 great grandchildren: Maya and Darvin. Dennis worked for General Motors in finance for 31 years. The company transferred him to Detroit, Michigan, South Gate, California, and Baltimore, Maryland. He retired as Assistant Comptroller in 1990 from Baltimore Plant. He and Cathy then moved back to California and into Sun lakes in 1993. He worked as a part time accountant in fiancé for the City of Banning after retirement to stay busy. During his retirement he enjoyed golfing and Country Line Dancing at Sun Lakes for 28 years, He played a big part in the annual charity golf tournament there as well. He loved his family and he loved planning family vacations. Dennis is survived by his wife of almost 62 years Catherine, 3 children,, 5 grandchildren, and 2 great grand children and his sister Jeraldine. Our family wants to especially thank Ron and Jay from Julies Home Health Care for making Dennis' last days as peaceful as he wished. A Celebration of Life Reception will be held at the North Sun Lakes Country Clubhouse on Thursday, September 9th from 1pm to 4pm. A funeral mass will be held on Friday, September 10th at 11:30am at St. Kateri Catholic Church in Beaumont California.
See more See Less

In Memory Of Dennis H. Pleimann