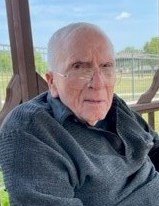 John W. Seals, Jr. 94, died July 12, 2022, at the Cameron VA Nursing Facility. He was born December, 23, 1927 in Chillicothe, Missouri the son of John W. Seals, Sr. and Nancy Edna (McLallen) Seals. John graduated from Chillicothe High School where he met his wife of 62 years Rosemary (Powelson) Seals. After marrying in 1945, John joined the Navy and served in WWII. In 1955 John and Rosemary settled in Belton, Missouri where he worked for AT&T. John was a member of the Kansas City Shriners. In addition to his parents, he was predeceased by is wife Rosemary (Powelson) Seals; daughter Mary L. Singher; son Jay G. Seals; granddaughter Traci M. Singher and his brother Donald Seals. He is survived by his son John P. Seals (Kathy) of Ridgecrest, California; daughter-in-law Stephanie A. Seals of Belton, Missouri; grandchildren Monica Vanzee, John Christopher Seals, Jay A. Seals, Stephen J. Seals and Anna R. Seals. John and Rosemary will be inurned at Leavenworth National Cemetery, Leavenworth, Kansas. Fond memories and expressions of sympathy may be shared at www.mcgilleygeorgebelton.com for the Seals family.
See more See Less