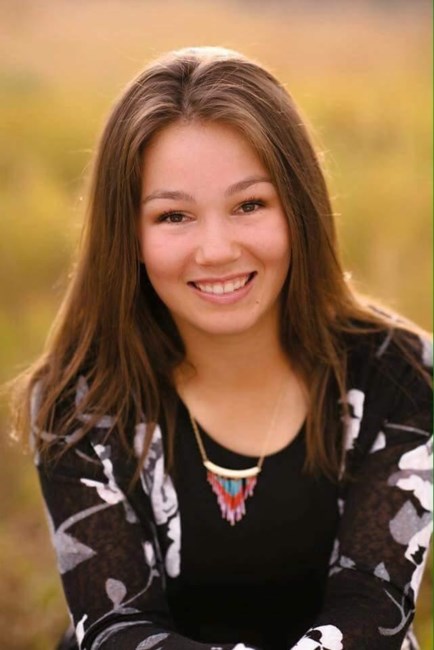 Dina Louise Brown (Dina Shchetinina) was born on August 8, 1997, in Shekino town, Tula region, Russia. On December 17, 1998, Marilyn Brown Fausset adopted Dina in Tula, Russia, and they arrived in Colorado just in time for Christmas. Dina has resided in south Boulder ever since, attending Rainbow and Fireside Preschools, Mesa Elementary, Southern Hills Middle School, and Fairview High School. On the morning of December 17, 2015, Dina was found unresponsive and in cardiac arrest, and in spite of much prayer--and the efforts of paramedic and hospital staff--our beloved Dina died of natural causes three days later at Boulder Community Health. She was awarded her high school diploma (class of 2016) that day by Principal Don Stensrud, with friends and family present. Her parents worked with Donor Alliance, and at least four people have received the gift of organ donation. Dina was an enthusiastic athlete, participating in softball (she received her varsity letter at the hospital) and track in high school, as well as years of recreational softball in the Boulder Valley Girls Softball Association, where she was nicknamed "Cheetah." Dina marched in several Lights of December parades when she was a member of Girl Scout Troop 1285. She loved attending Youth of Unity (YOU) rallies with her Columbine Unity teen group. She attended Russian/Eastern European/Central Asian (REECA) Heritage Camp every summer with Heritage Camps for Adoptive Families. She also made many friends at activities with Families for Russian and Ukrainian Adoption (FRUA), where she was once Snow Maiden to Grandfather Frost. Last summer, she finished her third season as a Junior Ranger with the City of Boulder, helping maintain open space trails. Recently, she volunteered as an Eye to Eye mentor at Southern Hills Middle School, and there she was able to put to use one of her greatest talents and passions--art. Dina is survived by many friends far and near as well as her parents, Marilyn and Neal Fausset of Boulder, her brothers Yuri Brown (Longmont, adopted from Tula, Russia in 2002) and Steven Fausset (and wife Sarah, Westminster); aunt and uncle Eileen and Dean Carpenter (Niwot), uncle and aunt Alan and Joan Brown (Kinsey, Montana), Aunt Lenore Brown (Hilton Head, S. Carolina); cousins Doug and Robin Carpenter (Niwot), Jake Brown (Lakewood), Dylan Brown (and wife Anna, Seeley Lake, Montana), Neal Brown (and wife Kristen, Bismarck, ND), Andrew Brown (Asheville, NC), and Melissa Brown (and husband Ron Luhur, Jakarta, Indonesia); many other Brown relatives, plus relatives in Nord-Trøndelag, Norway. She is predeceased by her grandparents and her Uncle Hockey (Lu V. L. Brown, III). A memorial service will be held on Monday, January 18, 2016, at 1:30 PM at the First United Methodist Church of Boulder, 1421 Spruce Street, Boulder, CO. Donations may be made in Dina's name to FRUA (Families for Russian and Ukrainian Adoption) at www.frua.org / P.O. Box 2944 Merrifield, VA 22116 or to the Columbine Spiritual Center (indicate Youth of Unity or building fund), 8900 Arapahoe Road, Boulder, CO 80303.
See more See Less

In Memory Of Dina Louise Brown