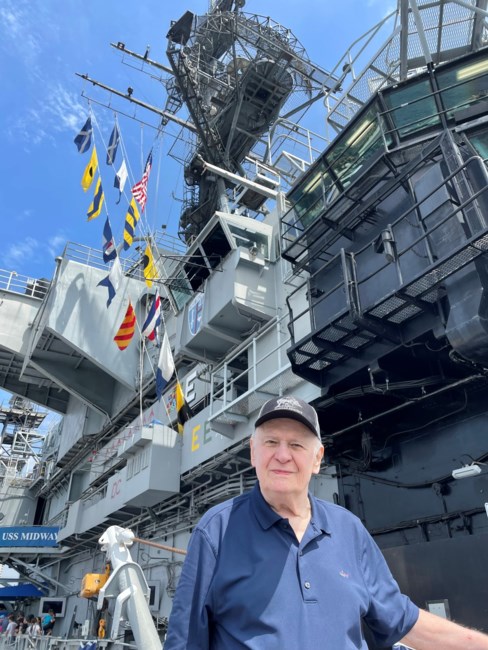 Bill Ramsaur, 83, of St. Simons Island, GA passed away Saturday, February 19th in Brunswick, GA. A native of Atlanta, he attended Bass High School and Baylor University where he graduated in 1959, with majors in History and Religion. After completing Naval Officer Candidate School, Bill was assigned to an aircraft carrier, USS Shangri-la, where he served as the Radio Officer in the Communications Department. He enjoyed frequent reunions with his shipmates and continued to serve in the Naval Reserve where he retired as a Lieutenant Commander. His ship was home-ported in Mayport, Florida where Bill met Gloria Smith, a native of Brunswick, who was an art teacher in Jacksonville. They were married at St. Mark’s Episcopal Church in Brunswick and settled in Atlanta where Bill worked at the First National Bank. They had four sons Scott, Mike, Jeff and Ricky (who died as an infant). He obtained a master’s degree at Georgia State University in 1966 and joined Arthur Andersen & Co. where he became a Certified Public Accountant. After thirty years and six relocations with Andersen Consulting, Bill and Gloria retired to St. Simons Island. Bill was a member of the Marshes of Glynn Sons of the American Revolution Chapter who sponsored patriotic, educational, and historical activities. These included Frederica Patriots Day and Fort Morris annual commemorations and dedications of markers for Revolutionary soldiers buried at Christ Church Frederica, St. Mary’s Oak Grove Cemetery, and Midway Colonial Cemetery. He performed as General George Washington for thousands of local students and participated in the Veterans Council of the Golden Isles activities, including the annual Flag Day ceremonies in Brunswick and lead the 4th of July Golf Cart Parade on St Simons. A communicant at Christ Church Frederica, Bill enjoyed serving as a docent, leading tours in the historic Church and Cemetery. He often said one of his highlights was a historical and spiritual pilgrimage to Israel. In addition to his parents, Aubrey and Canoy Vanlandingham Ramsaur, Bill was pre-deceased by his wife Gloria, sister Audrey, brother Richard, and infant son Ricky. He is survived by three sons: Scott (wife Deena) of St. Simons Island; Mike of Franklin, Tennessee; and Jeff (wife Jorie) of Laguna Nigel, California; four grandchildren: Kody, Taylor, Will and Ansley Ramsaur; Sister-in-law: Lynne Ramsaur; nephews: Lee Ramsaur, Ken and Steve Waits; and Aikens, Scarboros and others who called him “Uncle Bill.” Friends and family who wish to remember Bill may donate to the Marshes of Glynn SAR Chapter Education Fund, PO Box 20001, St. Simons Island, GA 31522 or Christ Church Frederica Building Campaign, 6329 Frederica Road, St. Simons Island, GA 31522. A memorial service is scheduled to be held on March 12th at 10:00am at Christ Church Frederica with a reception to follow in the Parish House. Sons of the American Revolution Compatriots will serve as Honorary Pallbearers.
See more See Less

In Memory Of William Foye Ramsaur