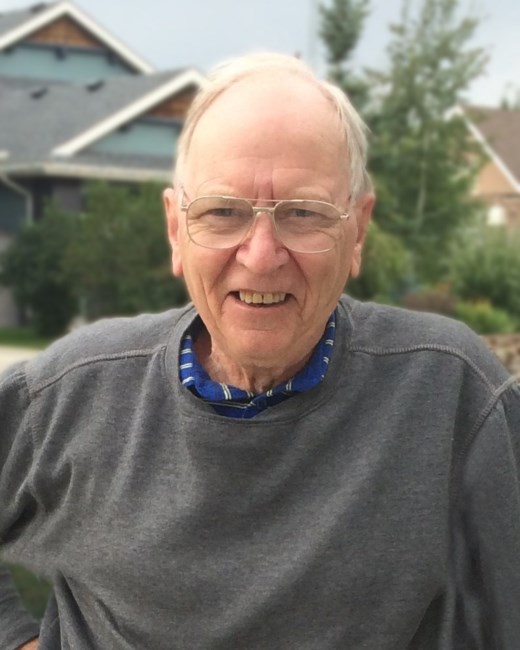 Austen passed away peacefully in Calgary, Alberta on Monday, August 1, 2022 at the age of 91. He was born in England on November 7, 1930 and came to Canada in 1952 where he worked for many years for Equifax. Austen met Barbara Charman at a YMCA dance and they were later married in Nova Scotia on May 5, 1956. They lived in several small Alberta towns before settling in Calgary in the Collingwood community, later moving to North Haven. Both Austen and Barbara were wonderful walkers and spent many hours in Nose Hill Park. Austen had many talents and interests and was blessed to have good health and a long retirement to enjoy them. He was a voracious reader, visiting the library 3-4 times a week. He found joy in music at home and at church, singing in choirs for most of his life. He loved cooking and baking, gardening, fishing, cars (including his prized Mustang), dogs and camping. He especially loved painting, both watercolour and oil, and so enjoyed attending painting classes. He was a member of the Masonic Lodge, recently receiving his 60 year service pin. He is survived by his 3 children, Pamela Rasmussen (John Langman), Virginia Quinn (Kevin) and Phillip Carn (Susan Sevcenko), his 2 grandchildren, Jeffrey Rasmussen (Robin) and Kristen Kalynchuk (Matthew) and 4 great-grandsons, Declan, Theo and Emery Rasmussen and Parker Kalynchuk. Austen was predeceased by his beloved wife Barbara in 2003. The family would like to thank Unit 39 at the Peter Lougheed Hospital for their kindness, compassion and professionalism in supporting Austen in his final days. A Memorial Service will be held at Foster’s Garden Chapel, 3220 – 4 Street N.W., Calgary, Alberta (across from Queen’s Park Cemetery) on Monday, August 8, 2022 at 10:00 AM. In lieu of flowers, donations can be made to the Calgary Public Library at https://libraryfoundation.ca/donate/
See more See Less

In Memory Of Austen Hugh Carn