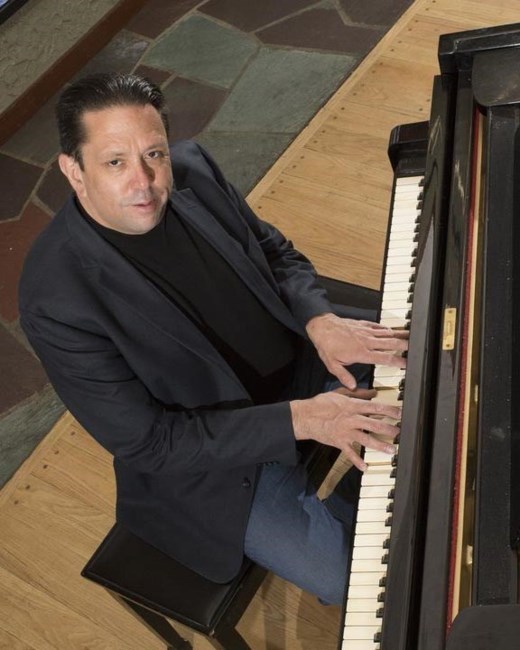 It is with heavy hearts that we announce the passing of Brian on August 16, 2021 at the age of 59 years after a two year battle with cancer. Brian was born in Calgary, Alberta on September 19, 1961 to Robert and Geneva Buchanan. Brian grew up in the Highwood area of northwest Calgary and attended Highwood Elementary, Colonel Irvine Junior High and James Fowler High School. At an early age Brian fell in love with music and dedicated his life to becoming an accomplished pianist. Brian was recognized across Canada and respected as a top Jazz musician. He played with many legendary artists including Clark Terry, Johnny Griffin, Herb Ellis, Freddie Hubbard, P.J Perry, Clarence “Big” Miller, Sheila Jordan, Cindy McLeod and many others. Brian wrote many original songs and he arranged, produced and released several albums including, Soulstice, Avenues, The King Eddie ‘Live’ and his most recent album in 2020 “Solo Sessions”. His latest album received critical acclaim and airplay across Canada and the US. It was also nominated for “Jazz Recording of the Year” for the 2021 YYC Music Awards. Brian had a great sense of humour and was a kind, caring and compassionate person who always remembered family holidays, birthdays and other special occasions. He was an avid sports fan and a devoted fan of the Calgary Flames and Calgary Stampeders. Brian’s memory will be cherished by his family and many friends. Brian was predeceased by his parents Bob and Geneva Buchanan. He will be sadly missed and lovingly remembered by his beloved sons Franklin and Christian (Satory), his brothers Alan (Ricarda), Tom (Kim), and by Helen Yuen (Kai) and his many nieces, nephews and cousins. Brian fought a long and courageous battle with cancer, never complaining and always remaining positive. The family wishes to thank the staff of the Foothills Hospital and the Tom Baker Cancer Centre for their compassionate care and support. A Memorial Service will be held for family and friends sometime this fall. In lieu of flowers, donations may be made directly to Alberta Cancer Foundation www.albertacancer.ca
See more See Less

In Memory Of Brian Edward Buchanan