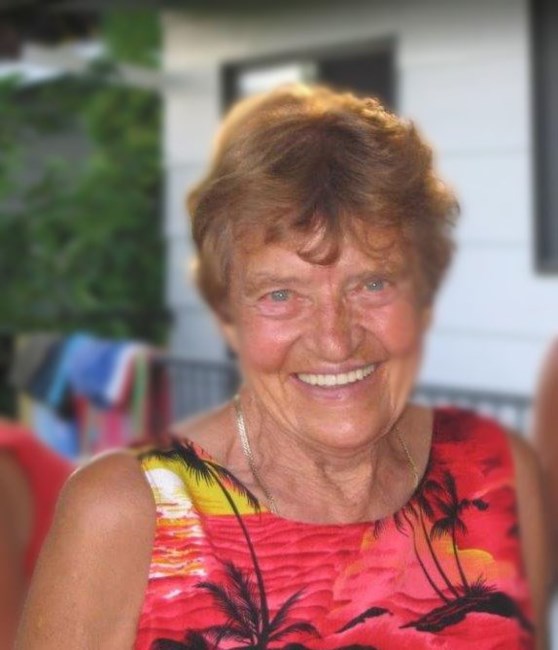 It is with great sadness that we announce the passing of Eva Stadie. Eva is sadly missed by her 3 sons Gerald (Barbara), Ralph (Rebecca), Claus (Monique), and 10 grandchildren. She was predeceased by her husband of 53 years, Horst, her sister Herta, and her brother Bernhard. Eva was born near Tilsit, East Prussia. Along with her parents Bruno and Johanna and 2 sisters, Herta and Dora, she immigrated to Canada in 1951, first settling in Coaldale, Alberta. There the family was part of the immigrant Mennonite community that worked in the sugar beet fields. After finishing their commitment to work on the farm, the family moved to Calgary. In 1960 Eva met the love of her life, Horst and they married shortly thereafter. They made their home in Calgary where they raised their three sons. Eva was primarily a stay at home mom, but she also worked part-time for many years at Canada Safeway as a meat wrapper. In 1990, she and Horst retired in West Kelowna. Oma and Opa’s new home quickly became a favourite place for family get togethers. She was a great cook and worked tirelessly in the kitchen to satisfy the seemingly unending appetites of her kids and grandkids who loved to visit the sunny Okanagan. Together with Horst, she passionately nurtured roses, tomatoes, and numerous varieties of fresh fruit in their beautiful garden. Eva volunteered at the snack shop at the Kelowna General Hospital and could regularly be seen strolling the hills along Okanagan Lake, from which she enjoyed the views that she had become so fond of. Shortly after Horst passed away in 2013, she returned to Calgary to be closer to her family and made a new group of friends at the Chartwell Harbours retirement community. She was always on the lookout for someone to join her in her favourite card game - Rook. Intensely competitive, she didn’t like to lose, so you had to play pretty hard if you wanted to beat her. If a card game wasn’t an option, she would happily settle down with a good book or take a brisk walk around the small lake adjacent to her apartment building, racing against anyone who would take up the challenge. We would also like to extend our deepest gratitude to the compassionate and supportive staff, especially those at the Chartwell Harbours Retirement Residence, Carewest Glenmore Park, and the Rockyview Hospital. A private Celebration of Life was held on Monday, April 20, 2020 at Foster's Garden Chapel Funeral Home and Crematorium. Please contact Foster’s Garden Chapel at 403-297-0888 for information on how to access the Live Stream broadcast. In lieu of flowers, donations in memory of Eva Stadie may be made directly to Thornhill Baptist Church, 128 Tache Ave NW, Calgary, AB T2K 3R5.
See more See Less

In Memory Of Eva Johanna Stadie