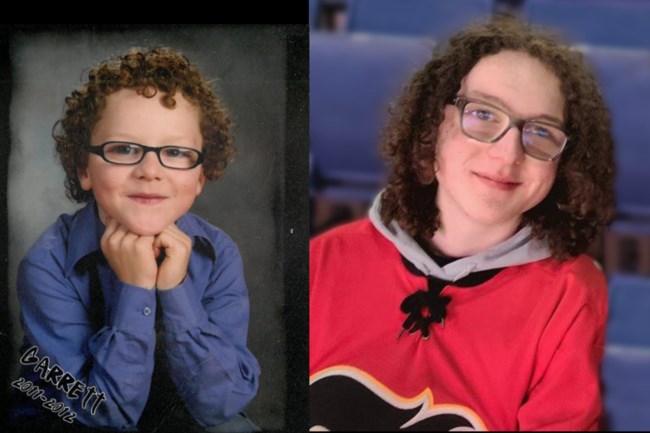 Garrett Bond Sophia Jennings passed away suddenly at home on Saturday May 7, 2022 at the age of 17. Garrett was born an old soul in Calgary on July 12th 2004. From very early in his short life, his family knew that Garrett was special. He liked to talk to everyone around him and could carry a conversation with other children and adults alike. Garrett was an early reader and an expert at math from a very young age. He would read chapter books meant for children much older that he was and we found out very early that he was a gifted child. After struggling early in school, they placed him in the Gifted and Talented Education program where he finally found a way to learn at his level. Garrett loved to listen as his mom read him and his brother Matthew book series like Harry Potter, the Hunger Games, and The guardians of Ga’Hoole. He read through Halo books and loved to eat his mothers “special cheese sandwiches”. Garrett had a special relationship with his dog Gracie, who slept on his bed every night and spent most days sitting under his desk while he played on his computer. During a summer trip to Newfoundland to spend time with his Great Grandparents Bond and Florizel Jennings, Garrett learned that there had been many Bond’s in his family and decided that he wanted to go by his middle name too. From that point he was Bond, and he was proud to be one of the many Bond’s in the family. Bond liked to play Magic the Gathering with his cousin, and he loved to play video games online with the many friends he made in the gaming community. Bond was an expert at all things computer related and built his own gaming computer. Bond loved to eat a box of Ritz crackers with a jar of peanut butter while he spent hours online playing Space Station 13. Lately Bond had come to the realization that he was a she. She was navigating through a lifetime of feelings that she never spoke about. She preferred the name Sophia and with the help of her best friend Nathan and her Girlfriend Emmi, she was finally starting to express who she really was. Her parents and brother are so grateful for the love and friendship that Nathan, Marco and Emmi gave to Sophia in her final time with us. Garrett Bond Sophia Jennings is survived by their parents Michael and Tawnya (nee Lockhart) Jennings, their older brother Matthew and his Girlfriend Elizabeth, Their Grandparents Gary and Mary Jennings of Stratford, Prince Edward Island and Clayton and Sharon Lockhart of Winnipeg Manitoba, Their Great Grandmother Florizel Jennings and many Uncles, Aunts, cousins and extended family. Also mourning is their best friend Nathan and their girlfriend Emmi, and Gracie the dog, who will be forever waiting for her person to come home. Funeral services will be held at Parkdale United Church located at 2919 8th Ave NW on Saturday May 14th, 2022 at 2 PM. In honor of Garrett Bond Sophia, please wear something pink to the service. In lieu of flowers the family is asking for donations to Hull Services, which provides mental health services for youth and families. Hull Services at https://hullservices.ca/
See more See Less