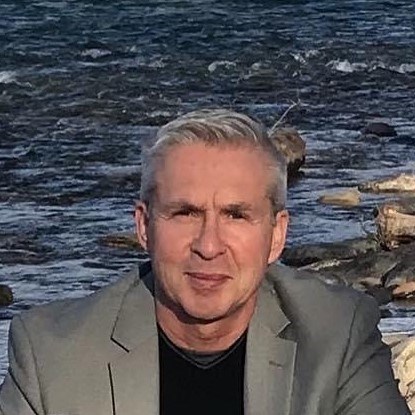 It is with profound sadness that we announce that Wes passed away peacefully, surrounded by his family, on the morning of August 7 after a courageous battle with brain cancer at the young age of 59. Wes grew up in Langenburg, Saskatchewan. He attended the University of Saskatchewan and earned a Bachelor of Science degree, majoring in Computer Science. He then moved to Calgary where he joined Deloitte’s Consulting Team and became a designated Chartered Professional Accountant. Wes always had the entrepreneurial spirit and in 1994 he co-founded an energy software firm where he was the Vice-President of Implementation until 2018. He then began to focus on leisure activities and hobbies. Wes was an avid outdoorsman enjoying golf, hiking, cycling, fishing, travel and relaxing in the Okanagan. Family was especially important to Wes. He believed in maintaining strong relationships and regularly kept in touch with all of us. He was always eager to host family gatherings in his home. Wes was very sociable, connecting regularly with friends and enjoying life to the fullest. He was generous, kind, caring, a good listener and always willing to help others. He was a problem solver with an analytical mind. No task was too big or too small. Wes always had a positive outlook on life. He was courageous and graceful in his battle with a relentless and ruthless illness. Wes’ passing has left a void in our lives and an ache in our hearts. He will be missed by all who knew him. Wes leaves behind his children Justin and Jaylene and their dog Chewy; sister Bev (Murray); and brothers Doug (Brenda) and Craig (Patricia) and their families along with a large extended family of cousins, aunts and uncles to remember and celebrate his life. Wes was predeceased by his parents Ted (2006) and Laura (2020). The family would like to thank the Doctors, Nurses, Healthcare Aids and the Home Care Team at the Foothills Medical Centre, Tom Baker Cancer Centre and the Rockyview General Hospital for the kind and compassionate care given to Wes throughout the last year. A Funeral Service will be held at St. Bonaventure Catholic Church, (1600 Acadia Drive SE, Calgary, Alberta), on Wednesday, September 16, 2020 at 11:00 a.m. Due to Alberta Health limitations on public gatherings, please confirm your attendance by RSVP with your name and number of attendees to replytomemorialforwes@gmail.com by Tuesday, September 15. If friends so desire, memorial tributes can be made to the Canadian Cancer Society (www.cancer.ca).
See more See Less