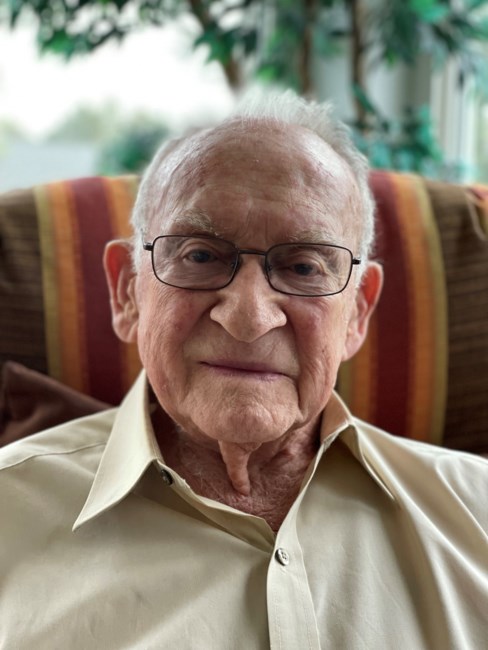 Elbert Jackson, Jr., went home to be with the Lord on Thursday, July 28, 2022, just two days prior to celebrating his 96th birthday. He was the son of the late Elbert Jackson, Sr., and Bertha Jackson. He was preceded in death by his first wife, Joyce Jackson, grandson, Jeremy Henderson, and two brothers, Joe and J. T. Jackson. Elbert retired as an insurance agent and was the owner of Tennessee Valley Insurance. He was a veteran of WWII, having served in the U S Navy. He was a member of Silverdale Baptist Church. Survivors include his wife, Beverly Summers Jackson, of Chattanooga, TN, two daughters, Ann Moore (Lynn), Connie Henderson, both of Ooltewah, TN, sister, Buffie Buffington, of Chattanooga, TN, brother, Ernest Jackson (Margie), of Rossville, GA, four grandchildren, nine great grandchildren, and several nieces and nephews. Funeral services will be held 12:00 pm, Thursday, August 4, 2022, in the Valley View Chapel of Chattanooga Funeral Home. Burial will follow in the Chattanooga National Cemetery with military rites being conducted. The family will receive friends from 10:00 am – 12:00 pm, Thursday, August 4, 2022, at the funeral home. Please share your thoughts and memories online at www.ChattanoogaValleyViewChapel.com Arrangements by Chattanooga Funeral Home, Valley View Chapel, 7414 Old Lee Highway, Chattanooga, TN 37421.
See more See Less

In Memory Of Elbert Jackson Jr.