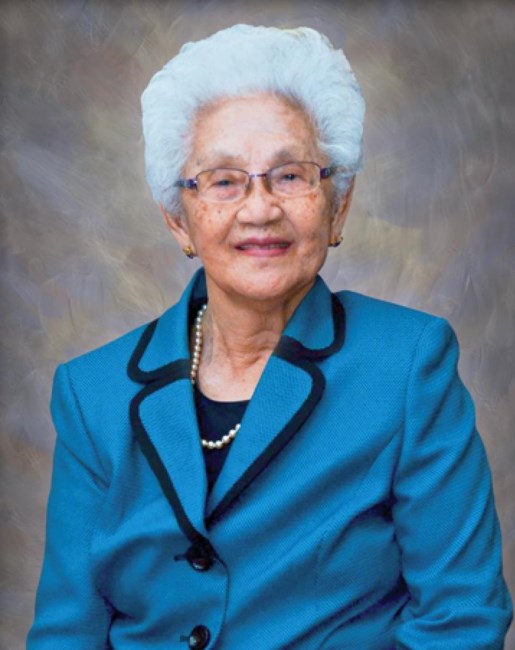 On Saturday, January 14, 2023, a little more than 103 years after she was born, Josefina Sacdalan Hizon passed away peacefully at home, surrounded by family. Affectionately known as Nanay (“Mom”), or Nanay Pinay, she was born on November 26, 1919 in Samal, a small town in Bataan, Philippines. The eldest child of Doroteo and Christina Sacdalan, she tragically lost both her parents while still in her early twenties and was suddenly thrust into being the matriarch of her family, having to care for her 4 siblings. She remained the steadfast matriarch of the family, even as it grew through generations and dispersed over continents. She married Teodoro Hizon in 1942, just as Japanese occupation in the Philippines began during WWII. She endured many of the hardships of war as she started her family which grew to 10 children, 8 of whom are still with us today. Nanay was widowed in 1971. In 1978, she joined her eldest daughter in the United States, as she sought a better life for her family. She worked as a seamstress for several high-profile clothing manufacturers, a craft and skill she was adept at, and which she would pass on to her grandkids and great grandkids by leading hands-on tutorials well into her 90s. She lived a life of simple pleasures, grilling fish in her outdoor kitchen, tending to the garden, and treating friends and family to her specialties including suman and pitsi pitsi (steamed desserts) and atsara (pickled relish), which she would produce by the truckload. Her one exception to her humble living was on her birthdays, where she absolutely relished being the star of the show. And with 103 of them, her birthdays became milestone events the entire family would also look forward to. Upon retirement, she never missed her annual trips to the Philippines, which continued until she was 100. Only the travel restrictions of the pandemic were able to break that streak. In the course of a century, the entire face of the world has changed. But for Nanay, she maintained a life that remained remarkably relevant over the decades. Her unwavering faith, her devotion to family, and even her daily, meditative walks were unaffected by the trappings of the modern world. These are the lessons that the skilled seamstress wove through the family tapestry generation after generation. Nanay Pinay is preceded in death by her husband Teodoro, sons Angelito and Jose, and brothers Jesse, Zosimo, Min, and Sabino. She is survived by her sister Nany, children Tessie, Lucy, Marietta, Nellie, Ofelia, Tom, Liz and Sally, 23 grandchildren, and 31 great grandchildren. Visitation is on Friday, January 27 from 4-9pm, at Funeraria del Angel in Chula Vista. Funeral Mass is on Saturday, January 28 at 11am, at St Pius X Church in Chula Vista.
See more See Less

In Memory Of Josefina Sacdalan Hizon